Protest and memorial for the Biak massacre 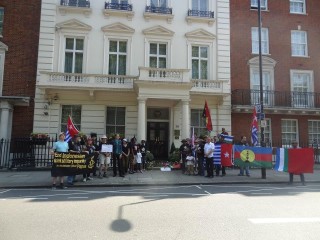 Yesterday the Free West Papua Campaign held a day of action and remembrance in commemoration of the tragic events of 6th July 1998, where on the island of Biak, West Papua, over 200 innocent West Papuan people were brutally killed by the Indonesian military just for raising their national flag atop the water tower in their town.

Yesterday we recalled the events of what has become known around the world as the Biak Massacre or “Bloody Biak” where peaceful West Papuan activists were gunned down as they slept beneath the Morning Star Flag. Others were forcibly taken from homes and taken onto two Indonesian naval vessels where many were tortured and stabbed by the Indonesian forces who then dumped all of the bodies into the sea.

To this day, not one single perpetrator has been brought to justice, from the Indonesian soldiers who pulled their triggers in Biak to the generals in Jayapura and Jakarta who mercilessly ordered the deaths of these 200 innocent people. Not one single family member from this horrific tragedy has received the reconciliation or justice that they so deserve.

Yesterday we held a protest attended by many, including distinguished human rights activists outside the Indonesian Embassy in London. We were joined by activists from all around the UK, the Netherlands and by West Papuans who remember and still feel the effects of the brutal murder of over 200 of their people in 1998.

The protest included a speech from world-famous human rights campaigner, Peter Tatchell who told passionately how he has seen with his own eyes, the effects on the families of those massacred in West Papua so mercilessly and who has campaigned throughout his life for the freedom, justice and full human rights for all of the people of West Papua. Peter gave an incredibly powerful speech where he joined the demands for justice and full freedom for the families of the Biak Massacre and for all the suffering people of West Papua. We are extremely grateful to Peter and to everyone who attended this demonstration and who remembered the people of Biak and all West Papuans yesterday, for their incredible and undiminishing support of the West Papuan people. With your support, West Papua will be free.

Founder of the Free West Papua Campaign and former political prisoner in West Papua, Benny Wenda also gave a speech in front of the Indonesian Embassy where he recalled very well, the Biak Massacre and the suffering of his people under Indonesian military rule for the last 50 years. Benny called for the freedom and rights of his people and told the world that the people of West Papua have never forgotten, nor will they ever forget the crimes committed against their people by the Indonesian forces.

At the end the protest, we ceremoniously laid wreaths and flowers onto the steps of the Indonesian Embassy in remembrance of all the people, who lost their lives 15 years ago. No less than 5 minutes after we laid the flowers, a police van and car filled with armed police pulled up outside the Embassy. Incredibly, they told us that the Indonesian Ambassador inside the Embassy had pulled the emergency alarm button, only supposed to be used in the case of real threat of terrorism. 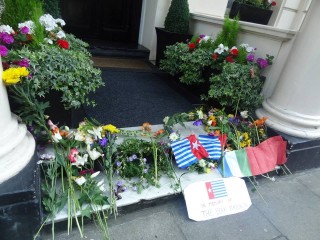 Incredibly, the Indonesian Embassy then told the police that Benny Wenda may have placed a bomb inside one of the bunches of flowers on the Embassy steps. The British police immediately understood that such a claim was outrageous and entirely politically motivated.

Our response to the Indonesian Embassy was that in laying the flowers on their Embassy, we were showing our remembrance of the 200 innocent West Papuan men, women and children who were killed so brutally by the Indonesian military on what Indonesia claims is their own territory. Indonesia claims that West Papuans are “their own people”. If this were true then surely any democratic and caring government would respect and be grateful for the remembrance of the loss of citizens of their own country.

In such a way, they are in fact denying that any Indonesian people were killed in this tragedy, only Papuans. In this way, we can ascertain to that even Indonesia does not truly believe that West Papuans are their own people.

The demands for freedom and justice continue

We, the West Papuan people and the international community will always demand the justice and freedom for all those involved in the Biak Massacre and in all incidents of such crimes against humanity committed by the Indonesian government, military, security forces and police towards the people of West Papua.

We would like to conclude this statement by saying a very heartfelt thank you to everyone who attended our demonstration as well as to all supporters who remembered this brutal massacre on the island of Biak, West Papua and all those West Papuan people who continue to this day, to suffer the oppression, genocide and colonialism of Indonesia.

Rest in peace, all brothers and sisters who so bravely lost their lives during this tragic and evil massacre. You and your people are always in our hearts and we promise we will never stop fighting for the freedom of every West Papuan person.