Anti-apartheid leader dedicates award to the people of West Papua 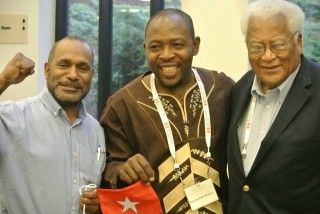 This week in Boston the Rev. James Lawson, the civil rights leader who worked alongside Martin Luther King, presented awards to four civil resisters. The awardees are leaders of movements for environmental protection, defending indigenous people, political rights, and the end of racial oppression. One of this year’s winners is Mkuseli (Khusta) Jack, the strategist who led consumer boycotts in South Africa during the darkest days of apartheid. In his acceptance speech Khusta said “I dedicate this award, which is lodged deep in my heart, to the people of West Papua.”

“People all round the world have to turn their lens to the abuses committed by the Indonesian authorities in West Papua” said Khusta. “They have to hear the cries of the West Papuan people for self-determination.”

Deploring the fact that West Papuan people have been denied the right to a free and fair vote about their political future Khusta remarked that “in this day and age there is no room for any form of colonization or encroachment on a people. This discrimination is even worse when it is based on racism” he added.

Turning directly to Benny Wenda, the West Papuan leader who was present at the awards ceremony, Khusta said “you must continue to fight for your right. You shall be free; it is only a matter of time.”

As leader of the United Democratic Front, a coalition of over 500 civilian based resistance groups aligned with the African National Congress, Mkuseli Jack demonstrated how the costs of apartheid could be transferred from the people of black townships to the commercial business community on which the support and revenue of the government partly depended. It was this strategy of withdrawing people’s buying power that alongside strikes by black workers and external sanctions by foreign governments, created the context for negotiations between Mandela and President F.W. de Klerk that finally brought the edifice of apartheid tumbling down.

Rev. Lawson also had some advice for the West Papuans. The key to any successful civil resistance struggle is fierce discipline, rigorous planning and strategy. Exhibiting the qualities of the respected pastor he is, Rev. Lawson took Wenda by the hands and told him that “the power of life in you that makes you strong is the power of God, the power of truth. Be strong. Be courageous. Organise the struggle. You are on the side of history and truth.”

In the late 1950s Martin Luther King Jnr. asked Rev. Lawson to travel to the South to help led the nonviolent struggle for basic rights that were then denied by the United States government. Rev. Lawson trained students from Nashville in the strategy and tactics of civil resistance. Lawson and the students successfully desegregated lunch-counters in the downtown area through determined nonviolent action. They then went on to organise other campaigns of the civil rights struggle. 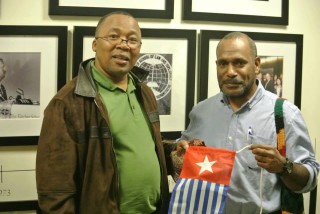 After receiving the awards Rev. Lawson spent the remainder of the evening talking with Papuans about their struggle for freedom. Wenda said that it was a dream come true meeting Rev. Lawson and Mkuseli Jack. “The civil rights struggle in the United States and the anti-apartheid struggle in South Africa are beacons of hope for me and my people” said Wenda. “I know that one day we will be free.”

Besides Mkuseli Jack the other three winners of the James Lawson Award for Achievement in the Practice of Nonviolent Conflict are:

The Lawson Awards are presented annually by the International Center on Nonviolent Conflict at The Fletcher School for Law and Diplomacy at Tufts University during the Fletcher Summer Institute. It is awarded to practitioners, scholars and journalists whose work serves as a model for how nonviolent change can be developed, understood and explained.