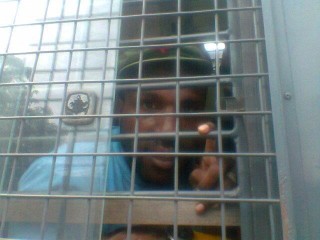 Following our urgent action campaign to release the KNPB members who were arrested on 13th May, we are pleased to inform you that Marten Manggaprouw, Yongky Ulimpa and Ely Kobak have been released. Sadly, the KNPB chairman Victor Yeimo remains in prison.

Please take action by texting (SMS) or phoning the Papua police chief and head of Jayapura police calling for his release.

We have a new phone number for the head of Jayapura police. We have spoken to him directly on this number and received a reply to text messages confirming that Victor is still being held in prison. We now need you to contact this number calling for Victor’s release.

Translation: “Free Victor Yeimo. We are watching closely what you are doing. You must respect international human rights.”