A Half Century On, Papua Still Poisons Neighbourly Ties 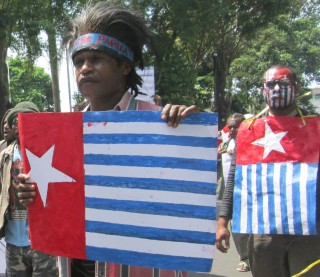 Demonstrators at a banned commemoration
demonstration – 1st May.

West Papua marked its 50-year anniversary under Indonesian rule last week and three events amply reminded us why it is a festering sore within the country and a serious inhibitor of good relations between Indonesia and the rest of the world.

The news that three people were shot dead at banned commemoration ceremonies was not the most prominent of these events. The shootings barely raised a ripple in the media in Indonesia or in the West. A few deaths here or there sadly have become unremarkable.

‘The shooting was according to procedure,” Papua Police spokesman Senior Commander I Gede Sumerta Jaya said later. The police had acted in self-defence, he said.

Indonesians outside Papua know political independence is a big issue in their easternmost province, but they view the problems there as largely economic. They believe a lot of money has been spent to achieve little. It weighs vaguely on their conscience, but they do not want to know the details, and their media lacks either the resources or the courage to spell them out.

The second event was a story in last weekend’s Good Weekend magazine that West Papuan children were being trafficked out of the Christian-majority province to Java to be educated in Islamic boarding schools.

That news is potentially explosive in a country rife with religious suspicion and a growing undertow of bullying Islam, but it came as news to most Indonesians. Some, Christian and Muslim alike, reacted with alarm online, but the official reaction has been to try to avoid reacting at all.

The event that really made a splash was when exiled independence leader Benny Wenda opened a new campaign office in Britain. He rented a space, held an opening ceremony and invited the lord mayor of Oxford to attend.

However, for that event the full might of the Indonesian state swung into action. The British ambassador was ”called in” to explain himself to the Indonesian Foreign Minister, Marty Natalegawa. Comments were made by MPs. Protesters held placards saying, ”UK support [free Papua] Indonesian support IRA”. An earnest opinion piece discussed the best way to ”isolate Benny Wenda”, a man who has already been chased from his country under threat of death and had a bogus Interpol arrest warrant – since overturned – issued against him by Indonesia.

The explanation to Natalegawa by British Foreign Secretary William Hague followed the form that we’re familiar with from politicians around the western world, including Australia: ”We respect the territorial integrity of Indonesia … We regard Papua as being part of Indonesia.”

That, though, did not wash with one influential politician, Hajriyanto Thohari. It’s worth quoting him at length, because rarely has the elite view of this subject been expressed so baldly.

”We often hear that, officially, international leaders … say they’re supportive, that Papua is part of Indonesia. But look at the case of the exit of East Timor from Indonesia in the old days, how much the western nations said they supported our sovereignty. But along the way, due to the interference of foreign nations, the province was lost.

”The West is always like that; you can’t trust them completely.”

Hajriyanto is the deputy speaker of the national parliament and from the Golkar party, which is part of President Susilo Bambang Yudhoyono’s governing coalition and the former vehicle for president Suharto.

With views like that, it’s clear Papua will not be an easy subject for Australia any time soon.