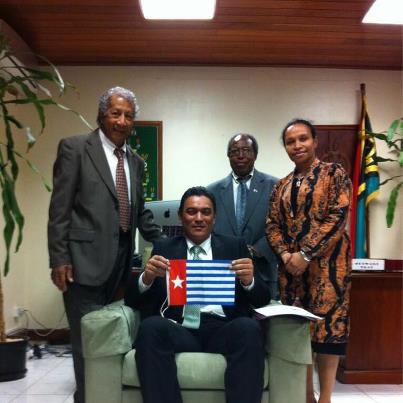 International support for West Papua is growing. Following recent support from Vanuata and from a minister in Papua New Guinea, the FLNKS party in New Caledonia has not offered its full support for the cause of the West Papuan people for freedom and independence. The following text is taken from Radio New Zealand International:

‘New Caledonia’s pro-independence FLNKS has pledged its full support for the cause of the West Papuan people for freedom and independence.

The West Papua National Coalition for Liberation visited Noumea recently as part of an official political tour in the Melanesian region to seek support among Melanesian Spearhead Group countries.

The delegation presented its official application for full MSG membership to Victor Tutugoro, the Executive of the FLNKAS and the incoming MSG Chairman.

Mr Tutugoro said the MSG is only for Melanesia and Liberation Movements within it, and the FLNKS leadership would be happy to welcome West Papua as a new member in the Melanesian family.

The delegation will next travel Honiara to meet the prime minister of Solomon Islands and other Government officials to present the MSG official application there.’