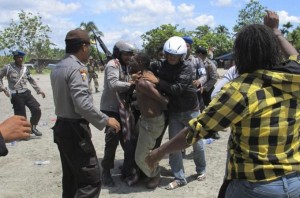 A new Al Jazeera documentary – People and Power – sets out to find what is behind what it calls ‘one of the most forgotten conflicts in the world.’ The documentary includes an interview with KNPB activist Uchak Logo who reflects on the image of the banned morning star flag. He says, ‘As long as Indonesia refuses to recognise us, the KNPB will continue to organize the public to rebel. If we don’t get independence we may as well die.’