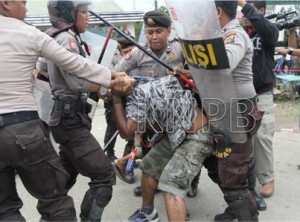 Recent information received by the Free West Papua Campaign indicates that the Indonesian National Police and the Australian trained Detachment 88 counter-terrorist unit are continuing to increase their operations against nonviolent West Papuan independence activists. Papuan villages have been entered and searched in several areas notably in Wamena and Puncak Jaya.

The armed sweeps across the highlands are targeting West Papuan people wearing traditional dress and local West Papuans are being forced by the military and police to reveal the whereabouts of independence campaigners.

Three day ago during these operations members of the West Papua National Committee (KNPB) were arrested. The people arrested are the Secretary General of the KNPB in the Wamena Regency Janus WaMu (26), and  6 other male activists; Eddo Doga (26),  Irika Kosay (19),  Jusuf Hiluka (52),  Yan Mabel (33 ),  Amus Elopere (22),  and  Melias Kosay (35). A woman activist Wioge Kosay (18) was also been arrested.

Mr Wenda said that “the tactics of the Indonesian colonial occupation forces are to brand peaceful West Papua independence campaigners as violent terrorists to justify killings and arrests of independence activists”. Mr Wenda said that “Insp. Gen. Tito Karnavian is using murder, intimidation and repression to create a climate of fear amongst the West Papua population, more than 90% of who support Self Determination”.  Mr Wenda stated that “Insp. Gen. Tito Karnavian will one day find himself in front of the International Criminal Court charged with war crimes”.

Mr Wenda stated that Institute for Human Rights Study and Advocacy (Elsham) has publically doubted the veracity of the police reports of a bomb plot and added that in the opinion of himself and other organisations, the military had simply fabricated an excuse to carry out arrests and repression”.

Mr Wenda added that “Ferry Marisan, director of the Papua branch of Elsham has said that the whole thing must have been fabricated by police, they placed the explosives in the office so they would have a reason to arrest them. Everyone knows that the West Papua National Committee is a peaceful pro-independence organization”.  Ferry Marisan also said that “If we observed their activities in Papua until the death of Mako Tabuni, they never staged violent acts, let alone kept firearms or explosive”.

Mr Wenda said that “Mako Tabuni was murdered on June 14th in what the Commission for Missing Persons and Victims of Violence (Kontras) called “a police hit”. The Police said Mako was resisting arrest when he was fatally shot, but I have eye witness reports that he was killed in cold blood by a masked military death squad from Detachment 88 whilst he was out shopping”. Mako Tabuni was murdered by the police now other KNPB members are being targeted”.

Benny Wenda called for the friends and supporters of West Papua around the world to push your Government to demand a UN peace keeping force in West Papua.

Benny Wenda said “my people are now facing very great danger because the Indonesians are looking for every West Papuan Independence activist. Theu say that they can wipe out the freedom movement and kill all the local leaders but they know that this will not work and they know that almost all Papuans, more than 90%, support self-determination.”

Benny Wenda said “today I am asking the UN and the governments of the USA, the UK, Australia, Papua New Guinea, the African states, the South American  states, the Netherlands , the European Union and all Melanesian Countries  to act now because the Indonesian Military and Police are brutally killing and repressing my people in West Papua. The Indonesian Military and Police are committed to a systematic genocide of the indigenous West Papuan Melanesians and this is taking place in West Papua right now. ”

Mr Wenda said “please respond to us and hear my peoples appeal for help”.