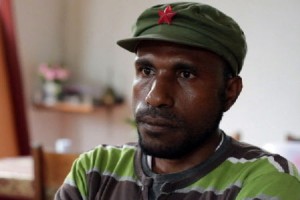 The Australian Broadcasting Corporation has broadcast an excellent report from undercover journalists on the independence struggle in West Papua and the abuses faced by those who campaign for freedom there. It includes a rare  interview with KNPB Chairman Viktor Yeimo (pictured) and has sparked intense debate in Australia over allegations that the Autralian funded and trained counter-terrorism unit, Detachment 88, has been involved in human rights abuses and targetting independence activists. The video can be seen here.

Following this, BBC News used some of the footage to compile their own report which can be seen here.