This report was originally published by the Human Rights Organisation, the International Coalition for Papua (ICP) and can be read here. 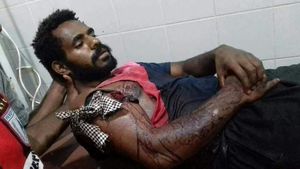 The International Coalition for Papua has received credible information in relation to the alleged torture and ill-treatment of two Papuan students on 27 August 2018 in the residential area of Perumnas 3 Waena, Jayapura. Yetron Kogoya sustained a bullet wound on the right shoulder (see intro image) as police officers opened fire at a group of Papuan students. He was brought to the Bhayangkara police hospital for medical treatment. Asmel Yigibalom was tortured by police officers during detention at the Perumnas 3 Police post, resulting in a bleeding head injury which needed to be stitched at the Abepura General Hospital. According to the information received, police officers from the Jayapura district police arrested at least 14 students from Lanny Jaya regency and temporarily detained them at the district police station in Jayapura.

The shooting occurred around midnight, after a group of students – all living in the Lanny Jaya student dormitory – had gathered at the police post in Permunas 3 residential area in Waena, where the alleged perpetrator of a motorcycle theft had seeked shelter from the mob. Prior to the incident unknown perpetrators had stopped a dormitory resident, threatened him with a machete and stole his motor cycle. Subsequently, a group of student from the dormitory searched the Perumnas 3 area, where they found the alleged perpetrators and chased after them.

During the escape, Yetron Kogoya was hit by a bullet in the right shoulder near the new university campus at Kamwolker river. The police officers arrested 14 students in multiple places. While Yetron Kogoya received medical treatment at the Bhayangkara Police Hospital, the other 13 students were taken into custody at the Jayapura district police station (POLRESTA Jayapura) for further interrogation. It is currently unknown whether the police will press charges against the students.

Table with names of students being arrested during the incident