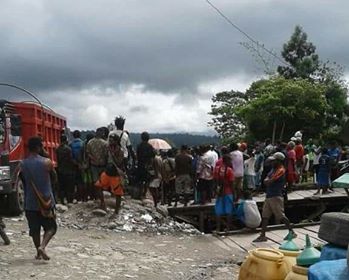 SUARAPAPUA.com reports – Yairus Gwijangge, Regent of Nduga District, Papua, confirmed that there was indeed an attack on Nduga. The attack was carried out by the Indonesian security forces to Alguru village.

“After I watched the aerial shooting of gunfire, there were no victims,” ​​said regent Yairus.

Yairus stated that the firing of the security forces was directed to the location where the TPN / OPM, which is located in Alguru area, and not in Kenyam.

“Kenyam and Alguru are separated by Kenyam river and shots are directed towards Alguru. Towards the east is Kenyam, and west is Alguru. So the shots were directed towards TPN / OPM in Alguru. I assure that there is no attack to the public. They carry out attacks to the place where TPN / OPM positions are located,” regent Yairus reaffirmed.

“So we cannot do anything (with the current conditions). That is if against the state, it’s the duty of law enforcement (law) that will be done,” he said.

Regent Yairus added, the most important thing now is that he has told the security forces not to do shooting or attack by air.

People Must Not Run to the Forest

After following direction of the shots, Yairus said, he had asked people not to run into the forest. But he suggested they go inside and stay in the house or find the place where he was.

“After I follow the direction of the shot from the air I direct the community not to run into the forest. But all should go into their house. And I have told you that if people are afraid, you (the community) all come to where I am here so we can see together here,” said Yairus.

He added that his side has gathered the community in Kenyam and provided some direction, input and prayer together.

“The people have come, and heard all the directives that we conveyed then we do pray together, then give inputs to one another so that no one is afraid and traumatized and then run to the forest. But the people must stay at Kenyam,” he explained.

In regards to the aircraft used by the security forces, Yairus stated that the plane previously used by the officers were shot down by the TPN / OPM.

“It is true. So this member while willing to use aircraft. The plane was shot by TPN / OPM i late June. But thank God the plane has been pulled by the airline and in Kenyam there is no plane,” he explained.

According to Yairus, since there is no aircraft to Kenyam, the authorities use the river route to get to Kenyam.

“Members (security forces) take advantage of the river route from Timika to Asmat amd than from Asmat to the entrance into Kenyam river. No plane dropped members to Kenyam. So they come by the river,” he explained.

He revealed that there are helicopter aircraft flying above Kenyam. According to him, the Helicopter plane came from Timika.

“The shooting was not from Wamena direction but from Timika direction. And the helicopter entered Nduga also came from Timika to Kenyam. They are circling above Kenyam while shootings above the village of Alguru,” he said.

Meanwhile, the unnamed source to suarapapua.com explained that this afternoon at around 12:30pm, Brimob troops utilised the river access to arrive in Nduga from Timika. The situation in Nduga, especially in Kenyam and Alguru was overwhelming because of the presence of officers and attacks by the security forces with the helicopters and it passes around the village of Alguru.

Another Suara Papua source, who also did not want to be named stated that the information circulating that the attacking officers using four helicoters was not true. The two are helicopters belonging to the TNI.

He said the sweeping was done by shooting from inside a helicopter plane. He suspected the shooting was a big gun.

“The one (helicopter) standby at Kenyam and the other doing the shooting and air strikes toward the village of Alguru. One helicopter flies up and down about three times above Alguru’s village and along the Kenyam river from 11am to 12pm. The air strike took one-hour for one helicopter along Kenyam river and around Alguru village, which considered to be the TPN / OPM headquarters” he explained.

He also said the same thing as Yairus that up till afternoon, there were no reports of casualties from the community. He added, at around half past six, a helicopter fly high above the village of Alguru.

“The helicopter that fly tonight drop four bombs. And the information from the ground is that the blast is not too big. But there was smoke and burning. It happens at night,” he said.

Until this news is published, there has not been a statement from the TNI or Police in Papua regarding the attack that occurred in Alguru, Nduga regency.

As quoted from tempo.co edition on 2 July, 2018, the Police of Indonesia sent a company of Brimob to pursue armed groups in Papua. The group became the mastermind in a series of shootings that occurred within a week yesterday.

“Brimob is already there to pursue, if not one company (100 personnel) has been there,” said the Head of Public Relations Division, Inspector General Setyo Wasisto, at National Police Headquarters, South Jakarta, Monday, July 2, 2018.

In the pursuit and arrest of the armed group, Setyo said, police have been exerting various efforts. One of them is the existence of two teams to arrest the perpetrators.

*An official statement from the Indonesian police in Papua has not been released by the time of this posting, or before suarapapua.com published this information.