Today 3rd February 2018, the Indonesian military threw BBC journalist Rebecca Henschke and her co-reporters Dwiki and Affan crew from West Papua after covering the ongoing health crisis in the Asmat region of the country. 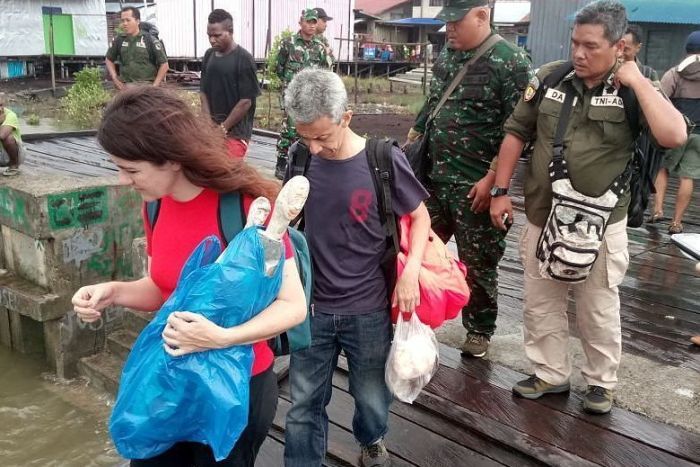 According to ABC News, ‘Authorities said BBC Indonesia bureau chief Rebecca Henschke was escorted out of the province after her social media posts “hurt the feelings of soldiers”‘.

Rebecca Henchke, who has been reporting in Indonesia for 12 years was uploading photos on Twitter showing the lack of adequate treatment of the health crisis by the Indonesian military

‘One of the tweets shows a photo of supplies sitting on a dock and says, “This is the aid coming in for severely malnourished children in Papua – instant noodles, super sweet soft drinks and biscuits.”

‘Henschke was questioned by military intelligence and police for five hours on Thursday afternoon. She was then held by immigration officers for 24 hours before being escorted out of Papua this morning.

‘”The tweet is not in line with the truth,” said the spokesman of the military in Papua, Colonel Muhammad Aidi.’

Commenting on a photo showing the Indonesian military with a caged bird, Colonel Muhammed Aidi said,

‘”How come Rebecca wrote and uploaded the picture like that? This is defamation; someone’s picture was taken secretly then distributed to media with information that is not in line with the truth.”‘

On their Instagram account, the Indonesian military wrote: “Somehow foreign media if involved directly is never objective, on the contrary there is an interest behind every news. It is unfortunate if the values of journalism which should encourage the truth are always defiled by journalists and media interests of the BBC”.

The Alliance of Independent Journalists (AJI) has slammed the Indonesian government and military for their expulsion of the journalists from West Papua.

“We condemn the expulsion of the BBC journalists. The incident shows that the government is afraid of foreign reporting of the conditions in Papua,” AJI chairman Abdul Manan said on Saturday.

President Joko “Jokowi” Widodo, he said, had repeatedly stated his commitment to open Papua for foreign journalists. “[This] shows the government is not serious about its promise to open journalistic access to Papua.” (gis/ahw)

This shocking story goes a long way to illustrate the lack of media freedom and foreign media access to West Papua, along with the aggressiveness of the Indonesian military towards any foreign journalists daring to report the truth from occupied West Papua. The Indonesian governments ongoing banning of media in West Papua only shows the world that they have something to hide in West Papua.