In another shocking tragedy, over the past few months around 100 West Papuan children have died from malnutrition, measles and chickenpox in remote areas of the country.

This terrible scourge was believed to have resulted in the deaths of 68 toddlers in the Asmat region where there are only 9 doctors available for over 200 villages. However, it has now been revealed that in the Okab region, 23 more children and 4 adults have also died. 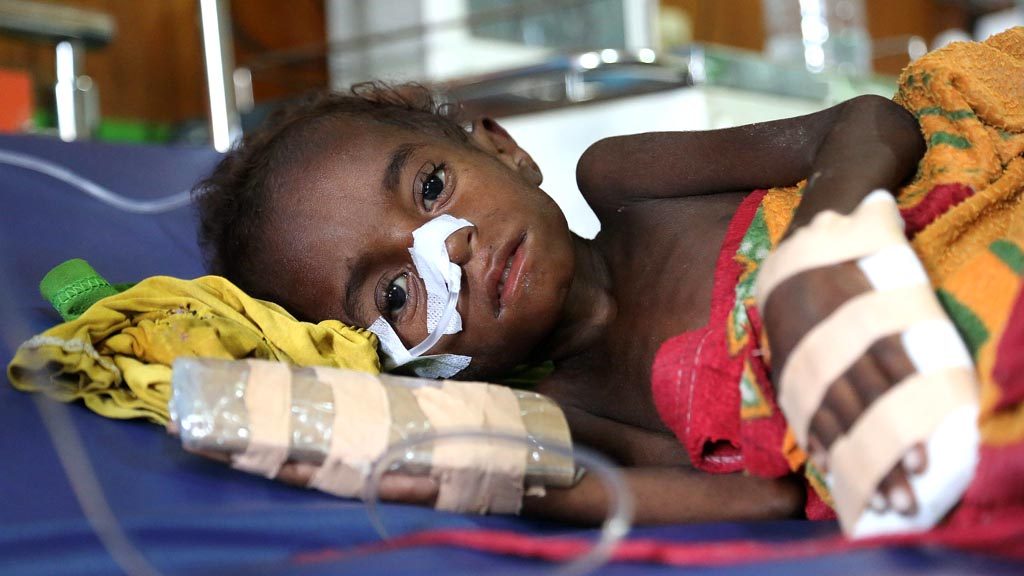 In its Editorial coverage of the health crisis, The Jakarta Post rhetorically asked: “Would a much smaller outbreak not cause much greater uproar among citizens if it occurred, say, in Java or Sumatra?”

The Editorial continued, “Indonesians are whipped up instantly not by the conditions of our chronically poorest province, but anytime a separatist flag is raised. Few question the arrest, torture and shooting of Papuan protesters, without questioning why anyone in a poor province would demand independence. As critics among Papuans reiterate, most Indonesians care about the rich land much more than their Melanesian brothers and sisters living too far from the capital and other more developed areas.”

Such a tragedy once again has raised questions from West Papua as to how the Indonesian government can afford to keep tens of thousands of soldiers in West Papua, build military posts every few kilometers and take billions of dollars worth of gold every year from the country; yet fail to prevent the deaths of so many children from preventable causes?

However, as the Jakarta Post points out, far from accepting responsibility for the health crisis, the Indonesian government has been quick to blame the people of West Papua themselves and their local parliament for not doing enough.

When Indonesia’s Minister for Social and Cultural Affairs, Puan Maharani, whether the government response was weak and unprepared or not, he said, “Oh no, (we were not late), we did all we could in anticipation. However, we also need the cooperation of local government, because they are the ones who know the problems and the situation in the region. The central government, of course, will work together to solve problems and anticipate things like that.”

Similarly, when questioned about the lack of Indonesian state healthcare for West Papua, Indonesian Health Minister Oscar Primadi told Al Jazeera, “Yes what we have done is not enough, but let’s not look at who is in the wrong.” He added, “We thought our colleagues in Papua could handle it but it turns out they need help and to be pushed more.”

In its 2017 Annual Report, the International Coalition for Papua (ICP), a human rights organisation which presents evidence to the Untied Nations, condemned the state of adequate healthcare in West Papua as being in a “devastating condition”. ICP documented the cases of at least 168 West Papuan people in 2017 who were human rights victims of “Violations of the Right to Health”.

In their report, ICP states: “An unresolved long-standing conflict about the political status of West Papua, the regions status as a military operation zone within Indonesia and racial discrimination in the practice of public services and security forces result in violence against indigenous Papuans and public services not being delivered in an equitable manner for the indigenous community as for non-indigenous residents.”

In fact, West Papua has the lowest life expectancy in Indonesia, the highest infant, child, and maternal mortality rates and the highest rate of HIV/AIDS outside of Africa.

Evidently, the Indonesian government’s claims at providing adequate healthcare in West Papua are not proven through the on-the-ground reality. Indonesian President Jokowi’s recent mass infrastructure development projects have been overwhelmingly dismissed by West Papuan people as token gestures aimed at either trying to draw attention away from human rights abuses; or even covertly aiding the Indonesian military in committing them.

West Papuan legislator Laurenzus Kadepa has stated, “Without human rights trials, Papuans will not only see the president as protecting suspected rights violators but also consider his infrastructure projects as being aimed at aiding the military and police to arrest, torture, or even to kill Papuans”.

The Indonesian government has had over 50 years to “develop” West Papua, yet in that time hundreds of thousands of West Papuan people have been killed and many continue to die from preventable causes. This is not natural. It is a systematic part of what people around the world are describing as a “slow-motion genocide” aimed at diminishing the West Papuan population from their land.

It is becoming increasingly clear to the international community at large that only when the people of West Papua are free to choose their own fate and destiny through self-determination, will they ever be free from such deliberate and systematic acts of inhumanity.