As you may have seen, we have been running a campaign to raise some attention on Yanto Awerkion, 27, who was arrested 8 months ago for just supporting a petition asking the United Nations to urgently help West Papua.

Yanto remains behind bars awaiting his trial on the 9th January, in Timika Court where he is facing charges of “Makar” or Treason, and 15 years in prison.

For months, his health seriously deteriorated and he has reported headaches, fevers and respiratory disorders. He has been given only 2 meals per day with little light, and unable to see his young family.

We are calling on activists around the world help us #FreeYanto

Please help by calling the local authorities in Timika and request Yanto Awerkon is unconditionally released from custody as soon as possible.

If you cannot speak Indonesian we suggest stating your name; location; organisation; and state you are calling for Yanto Awerkion, & to protect his human rights. Thank you.

These phone calls are a simple way of directly helping political prisoners in West Papua.

A campaign last year saw one prisoner be released after 8 months, after he also received threats of 15 years in prison.

We know these phone calls work, so let’s do it for Yanto.

Other ways you can help

You can also help by publishing the story on your sites, or by re-tweeting from the Free West Papua Campaign Twitter and Facebook.

You can also help by donating to FWPC. We we currently raising funds to get Yanto extra legal help. To make a donation, please follow the link here.

The more Indonesia know the world is watching, the more likely Yanto will be treated fairly, be given a fair trial, and will have a good chance of being freed in 2018.

As you know, Indonesia enforce a strict media blackout, so news on human rights abuses rarely make it to the international media. 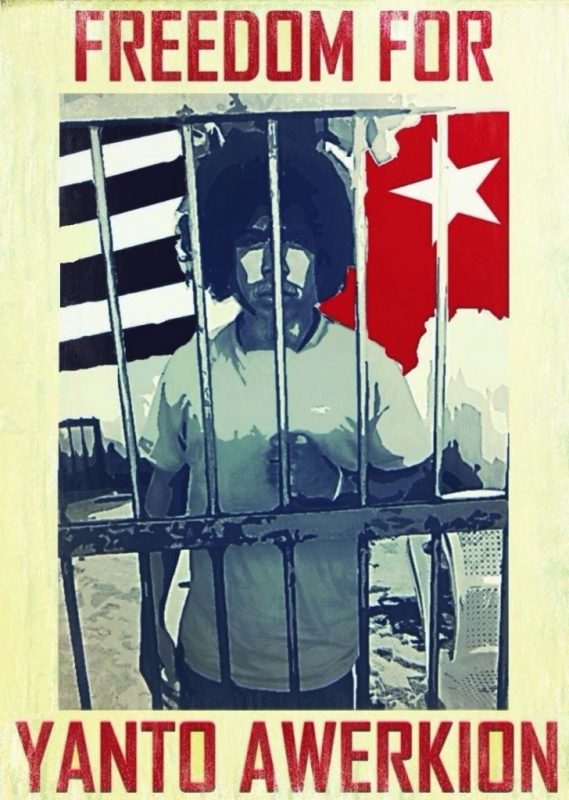