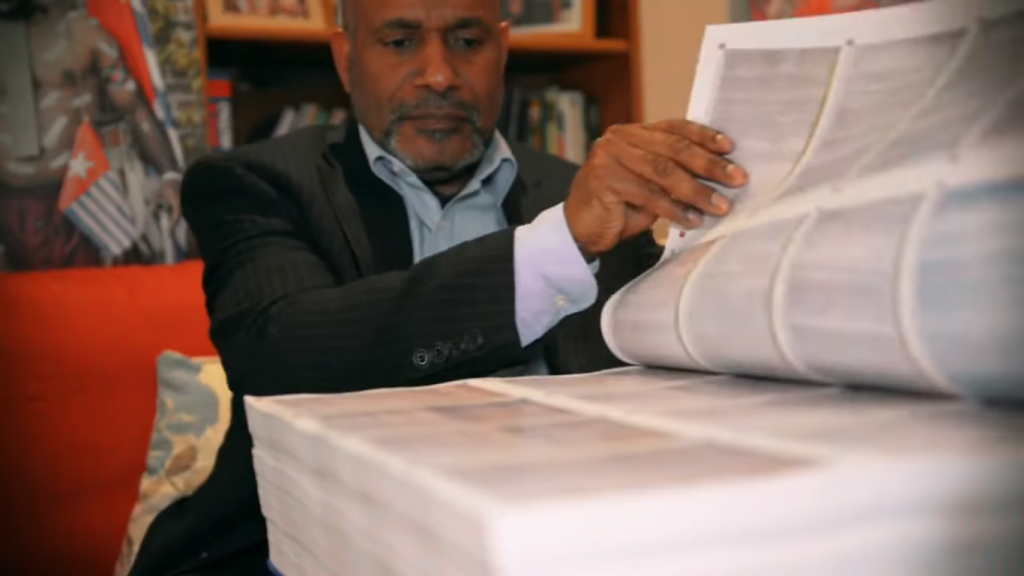 Benny Wenda, West Papuan Independence Leader and Spokesperson for the United Liberation Movement for West Papua (ULMWP), with a copy of the petition.

The full article, which was originally published on ABC, can be read below.

West Papua petition: Australia made a human rights promise that’s about to be tested

Many Australians wouldn’t think twice about putting their name to a petition to support a cause close to their hearts, but in Indonesia’s Papuan provinces, where free speech is routinely and severely curtailed, “acts of treason” such as supporting calls for independence can land you in jail for 15 years.

So it is truly remarkable that 1.8 million Papuans (about 70 per cent of the population) have signed a petition — specifically banned by the Indonesian Government — calling on the United Nations to conduct a free vote about independence.

The preparation of this ambitious petition and the attempted presentation in New York to the UN’s decolonisation committee marks a dramatic new chapter in West Papua’s history, but it is also certain to present serious challenges for the Australian Government.

Caught in the middle

Australia’s bid for a seat on the UN Human Rights Council centres on its promise to be a voice for human rights in the Pacific.

If it is to be true to this promise, it simply cannot ignore this landmark petition or the wishes of many Pacific nations to support self-determination in West Papua.

It has to break with the tradition of successive Australian governments that have simply turned a blind eye to the human rights atrocities that have occurred on our doorstep for decades, and instead take a principled stance.
In the 1950s, the Australian Government assisted the Dutch colonial government to transition West Papua towards independence. By 1961 the colony had its own flag, the “Morning Star”, and Papuan government officials. However, when conflict erupted in West Papua the following year between the Netherlands and Indonesia, the UN intervened.

A UN-brokered agreement gave temporary control of the colony to Indonesia and was meant to see a referendum held to determine the views of the population. But things did not go as planned.

Following six brutal years of Indonesian control, which involved well-documented human rights atrocities, the Indonesian military conducted a sham referendum in 1969 that it called the “Act of Free Choice”.

The Papuans were more or less deemed “too primitive” for democracy.

A mere 1,024 Papuans were hand-picked to vote on behalf of a population of nearly a million people. Under severe duress, including threats from military officials to cut out their tongues, they unsurprisingly voted for Papua to remain part of Indonesia.

An Australian journalist who witnessed the vote, Hugh Lunn, told a UN official about the violence and intimidation he had seen, but the concerns fell on deaf ears.

Two Papuan leaders, Clement Ronawery and Willem Zonggonau, tried to flee to New York to present the UN with evidence of the sham vote, but Australian authorities shamefully intercepted them and detained them on Manus Island.

The vote became known as the “Act of No Choice” in West Papua and in the decades that followed, an estimated 100,000 people have been killed or disappeared by the Indonesian authorities.

Just like with East Timor, Australian governments have ignored the human rights abuses that occurred in West Papua under the Suharto dictatorship, but actively provided military assistance and helped Indonesian authorities sweep such abuses under the carpet.

As the decades have passed by, not much has changed. But neither has the determination of the West Papuan people to ensure their voices are heard.

Despite the dangers, this petition has been passed village to village, from one end of Papua to the other.
An overwhelming majority of Papuans have put their name to it.

It calls on the UN to right the wrongs of its past failings and to hold a free, fair and internationally supervised vote so the Papuan people can finally have a say about the future of their country.

Australia on the world stage

The people of West Papua have a right to express their desires freely — a right the Australian Government should be willing to defend. We shouldn’t put trade and so-called pragmatism ahead of our values and moral duty to stand up for what is right.

Next month Australia is set to be appointed to the UN Human Rights Council for a three-year term. Now is the time for our government to decide what kind of role it’s going to play on that council.

It can continue to disappoint by trying to water down human rights resolutions — as it did last month regarding the violence unfolding in Myanmar, or it could find some courage and become a consistent and principled voice for human rights in the Asia Pacific region.

These 1.8 million Papuans just risked jail and violent reprisals in an attempt to have their voices heard. Rather than help silence them, the Australian Government can and should help ensure they are now heard on the world stage.

Tom Clarke is the director of campaigns at the Human Rights Law Centre.