On 27th March, 2017, a West Papuan man was executed by the Indonesian police on Yapen Island.* Below follows an urgent media statement from the United Liberation Movement for West Papua (ULMWP). 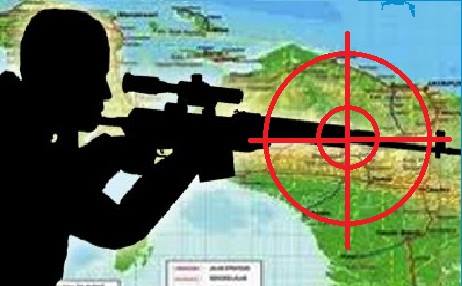 According to the testimony, the witness was sitting alongside Maikel Merani and another West Papuan man, believed to be Mikael’s father in a house in Konti Unai village and talking to one another. Armed Indonesian police officers then suddenly arrived and the 3 of them tried to escape through the back door. An Indonesian police officer then reportedly pointed his gun directly at the witness who called out “I am just an ordinary person, don’t shoot me.” The three of them were then told to put their hands on their heads and to sit down.

It is believed that many West Papuan people in the area have been chased into the jungle and their current whereabouts are unknown but the general feeling in the area is one of strong tension and intense fear of further reprisals or arrests. The man believed to be Maikel’s father was brought to an Indonesian police station and was interrogated. He remains scared and is reportedly with the body of Maikel which church leaders and other family members are not allowed to see.

The findings described here are all early reports of the situation and ULMWP will continue to update information as the situation unfolds.

Speaking today on the execution of Maikel Merani, ULMWP Spokesperson Benny Wenda stated
“The Indonesian police stigmatise every West Papuan person as a criminal or separatist as justification for killing the people of West Papua and as justification for their illegal occupation of our country. This same old story is nothing new to us. We will not give up our struggle for our fundamental right to self-determination.”

Benny Wenda went onto say “Everyday, West Papua is becoming a killing field. We desperately need the international community to look at the deteriorating human rights situation in West Papua. Just this month, West Papua was raised by 7 nations at the United Nations Human Rights Council and as the world can now see, the killings are still continuing. This May, Indonesia’s Periodic Review of human rights will take place at the United Nations yet there has been no improvement in human rights in West Papua, in fact the situation is only getting worse.”

For more information on the situation in West Papua, please visit www.ulmwp.org.

*Please note, The Free West Papua Campaign has not included the photo of Maikel Merani’s killing as it is extremely graphic and some may find it distressing.
« Previous post
Next post »