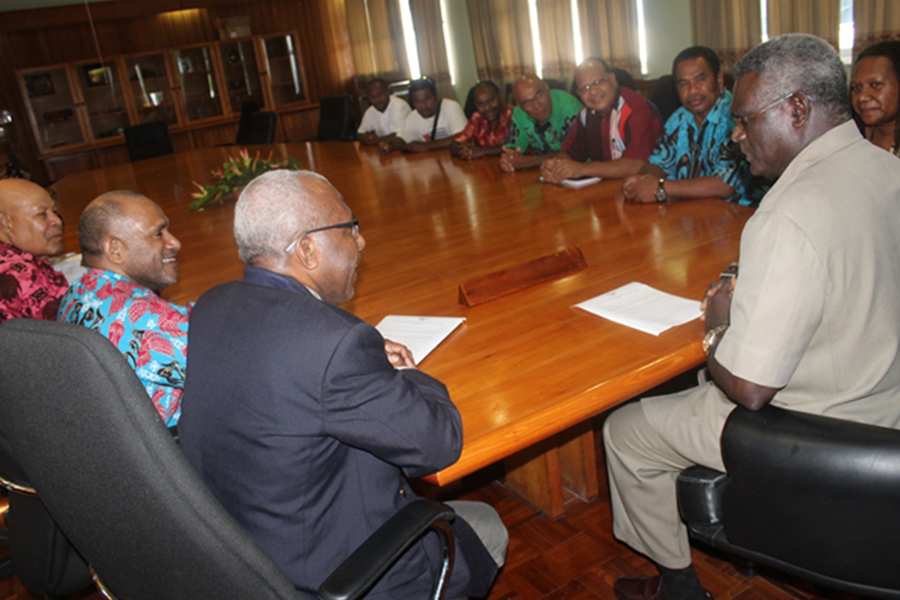 Members of the United Liberation Movement for West Papua (ULMWP) meeting with the Prime Minister of the Solomon Islands and Chairperson of the Melanesian Spearhead Group (MSG), Hon. Manasseh Sogavare

On January 21st, the Prime Minister of the Solomon Islands, and the Chairperson of the Melanesian Spearhead Group (MSG), Hon. Manasseh Sogavare met once again with members of the United Liberation Movement for West Papua (ULMWP).

The ULMWP briefed the Prime Minister on the situation in occupied West Papua and thanked him for his continued support for the freedom struggle.

ULMWP General Secretary Mr Octo Mote told the MSG Chair that the ULMWP greatly appreciates his strong stand and commitment on the issue of West Papua.
“We know that it is a very complex issue that nobody wants to touch but thank you for your strong stand, commitment and wisdom. Now we can see there is chance for West Papua in its struggles.”

In response, the Prime Minister acknowledged the ULMWP for updating him in his capacity as the MSG chair about the developments in West Papua, saying “it is important that he is kept abreast of the happenings there.” He also acknowledged the group’s appreciation for his strong advocacy for West Papua and said he is aware that the Indonesian President is very cautious about his actions and approach towards West Papuans very lately, knowing too well that the world is closely watching him.

A full copy of the Prime Ministers Press Statement following the meeting can be read here.

Following his meeting with members of the United Liberation Movement for West Papua, the Prime Minister was also interviewed by ABC Australia on his support for the West Papuan people.

Listen to the interview here

We are very grateful to Hon. Prime Minister Manasseh Sogavare and give our deepest thanks to his continued commitment in supporting West Papuan self-determination and freedom.

He has set a true example of leadership and Melanesian solidarity in the region and this support is so desperately needed by the people of West Papua who continue to suffer genocide and the illegal occupation of the country.