On Sunday 17th January, the US Ambassador to Indonesia, His Excellency Mr Robert Blake visited West Papua and met with Yan Christian Warinussy, Executive Director of the LP3BH, the Institute for Research, Investigation and the Development of Legal Aid, and the Recipient of the John Humphrey Freedom Award, 2005, Canada.

In a written report, Mr Warinussy described the meeting with His Excellency Mr Robert Blake, including the concerns the Ambassador showed of the ongoing human rights violations in West Papua. Mr Warinussy said 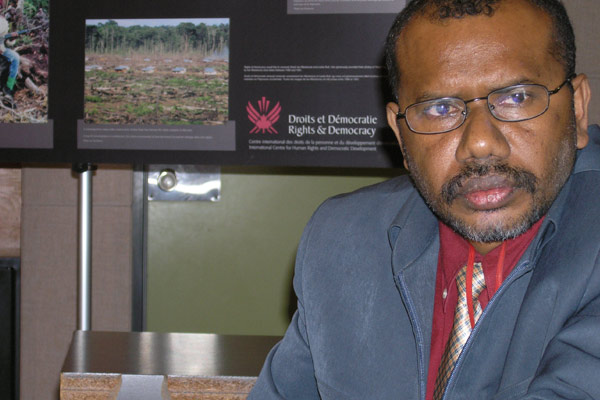 Yan Christian Warinussy, a West Papuan Human Rights defender. The Executive Director of the LP3BH, the Institute for Research, Investigation and the Development of Legal Aid, and the Recipient of the John Humphrey Freedom Award, 2005, Canada.

“Ambassador Blake was very concerned about all these incidents and the failure up to the present day by the Government of Indonesia to deal with any these cases.Ambassador Blake said that his government would guarantee that all those who had been responsible for these violations would be excluded from any its governmental programmes related to education and human rights.”

“I also told Ambassador Blake that these matters were now being seriously considered by various governments which were members of the Melanesian Spearhead Group (MSG) and members of the Pacific Islands Forum. I drew his attention to the fact that the United Liberation Movement for West Papua had been granted observer status by the MSG in June 2015. The result of all this was that these various regional state groups had pressed for a fact-finding human rights mission to be sent to West Papua and Papua.I also expressed the opinion that (examination of) all these serious cases should be considered by the Government of the USA as the only way to strengthen democracy and peace throughout the Land of Papua.”

It is very encouraging that the United States government is showing concern at the terrible human rights situation in occupied West Papua where it is estimated over 500,000 West Papuan people have been killed ever since West Papua was illegally annexed by Indonesia in the 1969 do called “Act of Free Choice”. (Known to West Papuans as the Act of NO Choice.) We continue to appeal to people, organisations and governments around the world to support the West Papuan people to be free from such abuses by supporting them exercising their fundamental right to self-determination freely and peacefully.