Responses to threats from the Indonesian Police and Intelligence Agency

West Papuan Independence Leader Benny Wenda recently wrote a Press Release condemning threats and blame from the Head of the Indonesian Police and the Head of the Indonesian Intelligence Agency. Following their response to this Press Release, Benny Wenda released a second Press Statement, quesioning who the real liars are when it comes to West Papua.

Copies of these 2 statements can be read below

As the New Year dawns and the suffering people of West Papua look to the future with renewed hope for liberation, the President of Indonesia, Joko Widodo set his feet down in West Papua in an attempt to legitimise the continued Indonesian military occupation of the country. Neither he nor the Indonesian police or military are welcome in West Papua as we West Papuans know that they are only there to continue to oppress us and exploit our natural resources.

The Indonesian government is doing all they can to try and draw attention away from the increasing human rights abuses in occupied West Papua. They do not want the world to find out about the ongoing genocide which has resulted in the deaths of over 500,000 West Papuan people. Such brutal killings have continued unabated ever since Indonesia illegally annexed West Papua in what we West Papuans refer to as the Act of NO Choice in 1969.

As part of this attention shifting, earlier this week the Head of the Indonesian Police, Badrodin Haiti childishly blamed myself for the recent deaths of 3 Indonesian policemen in West Papua which obviously I had nothing to do with whatsoever. I completely refute the ridiculous allegation which is just the latest in the surge of outright lies and propaganda being spread by the Indonesian government in an attempt to direct the blame for violence in West Papua away from the perpetrators. 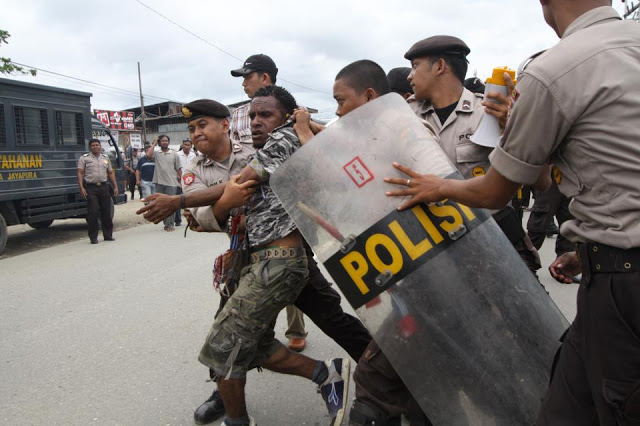 The Indonesian police know very well that not only do I live 9000 miles away in exile in the United Kingdom, but also that I am an entirely peaceful Independence Leader.
As a peaceful leader and a Nobel Peace Prize Nominee, I have always advocated an entirely peaceful solution for West Papua whereby all West Papuans will be able to peacefully fulfil our fundamental right to self-determination through an Independence referendum.

Despite these facts, the Indonesian Head of the Police, Badrodin Haiti alleges that “Benny Wenda’s group” was directly response for the deaths of these Indonesian police officers, even though he knows that I have never taken part in any violence whatsoever and I do not control any group which does.

I seriously doubt that the Indonesian Police Chief genuinely believes that I am responsible for the deaths of these policemen but if he does then he is seriously deluded. I suggest he checks the real facts and gets properly educated. This finger pointing attitude is so unprofessional for a Police Chief it is almost laughable. He should be deeply ashamed for deliberately scapegoating peaceful leaders while his own police officers get away with impunity after killing West Papuan people in cold blood. 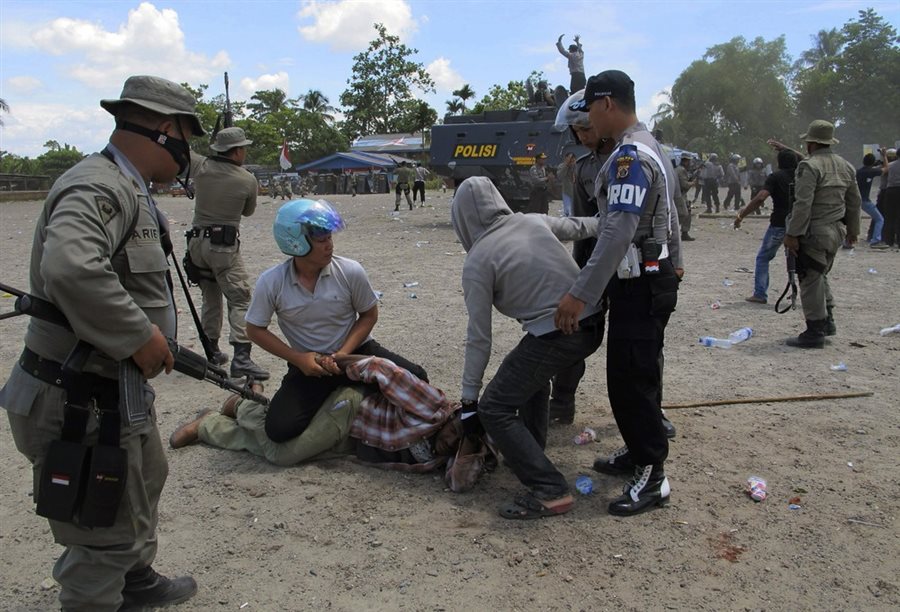 The Indonesian military and police have had a long history of trying to draw attention away from their human rights atrocities and this latest allegation is just the same old story being repeated over and over again. I remember clearly how the Indonesian government tried to silence the campaign by imposing an Interpol “Red Notice” on me in 2011 which was later dropped by Interpol themselves who deemed it “predominately political in nature”.

Why is it that after more than one year the Indonesian authorities are still unable to find any perpetrators of the massacre of West Papuan schoolchildren in Paniai, yet within 24 hours they immediately placed the blame on myself for deaths of Indonesian policemen?

Time and time again, West Papuans are massacred by the Indonesian authorities but the perpetrators never face justice.

Has there been any justice after the Paniai massacre? No.

Has there been any justice after the 2 West Papuan boys were shot in Timika on 28th September? No.

Has there been any justice after the 4 West Papuans were shot and tortured to death in Yapen on 1st December? No.

Papuan lives do not matter to the Indonesian government but when Indonesian authorities die, West Papuans are blamed immediately. In fact, in retaliation 50 Indonesian military and police personnel have already been dispatched to the area where these 3 Indonesian policemen were reported dead.

I know that these threats are meant to scare me but I refuse to be intimidated by the Indonesian authorities who occupy my country, kill my people and then try to force me to “cooperate” with their schemes. 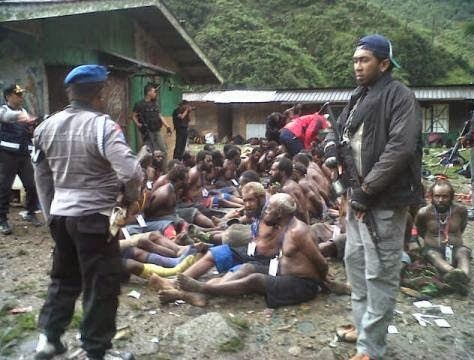 After being arrested and tortured in West Papua for peacefully leading my people, I escaped and was granted political asylum in the United Kingdom in 2003 where I now reside in exile.

What sort of methods is the Indonesian Intelligence Agency going to impose on me to try and force me to “cooperate”?

Is the Indonesian Government threatening to interfere with British law and prosecute me on false charges once again? Or will this “other method” involve sending Indonesian soldiers to come and kill me in the United Kingdom?

If the Indonesian Intelligence Agency want me to “cooperate” then they should let my people to exercise our fundamental right to self-determination in a peaceful Independence referendum as promised to us in 1962.

Neither I nor my people will be intimidated by the threats of these human rights abusing Indonesian authorities which feel they can bully their way around the world demanding that West Papuans who have been already granted political asylum are illegally extradited to be locked up and tortured again by the Indonesian authorities.

I therefore hope very much that despite the ongoing barring of foreign media by the Indonesian government, CNN and other media around the world will continue to report on the truth about occupied West Papua. I also hope that the Indonesian police and intelligence services will stop their childish finger pointing and threats towards entirely peaceful people.

This week, the world entered into a New Year, 2016. It is another year in which we West Papuans will continue to intensify our actions to peacefully struggle for the freedom of our people though exercising our fundamental right to self-determination.

We West Papuans will not be provoked or intimidated. We will continue our peaceful struggle until West Papua is finally free and Independent at last.

When it comes to West Papua, who are the real liars? 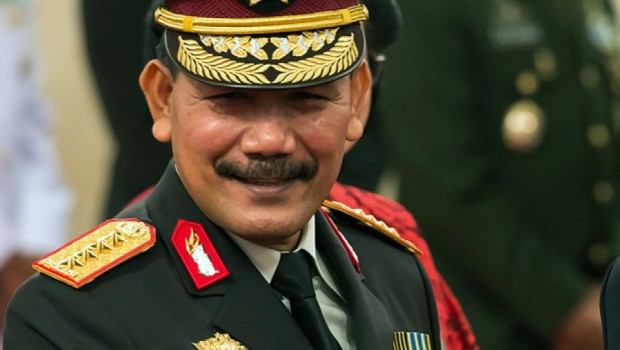 Following the publication of this Press Release, the Head of the Indonesian Police has at last shamefully admitted that I am not responsible for the attack of Indonesian policemen in West Papua. In fact, he claimed that he had ‘never mentioned the name of Benny Wenda’, despite the fact that CNN reported the exact time and place where he accused me. (On 28th December 2015, at the House of the Governor of East Nusa Tenggara in Kupang, the Police Chief said of the police shooting in Sinak “It is still done by the same group, namely Benny Wenda’s group,“).

Now the world can see that when confronted with the truth and with facts, the Indonesian police cannot defend their stance on West Papua. If the Head of the Indonesian Police blame me for this attack in Sinak then he is an outright liar. Why did he accuse me for something I did not do and then later claim he never mentioned my name?

If the Head of the Indonesian Police is allowed to lie like this in public, what are the other hundreds of police officers in West Papua allowed to get away with? We West Papuans continue to witness the brutal murder of our people at the hands of the Indonesian police and military, just because we stand up for our rights to self-determination and Independence. The Human Rights Commission Komnas HAM found that in 2015 more than 700 West Papuans were been persecuted through being arrested, beaten, and tortured. How many Indonesian officers were brought to justice for the human rights abuses against these more than 700 West Papuans?

Once again I question, why is it that after more than one year the Indonesian authorities are still unable to find any perpetrators of the massacre of West Papuan schoolchildren in Paniai, yet within 24 hours they immediately placed the blame on myself for deaths of Indonesian policemen?

The Head of the Indonesian Intelligence Agency, Sutiyoso also responded to my Press Release and suggested once again that dark methods were going to be implemented against me. When questioned by CNN about what other methods would be used if the ‘soft approach’ fails, he laughed and said ‘you already know’. 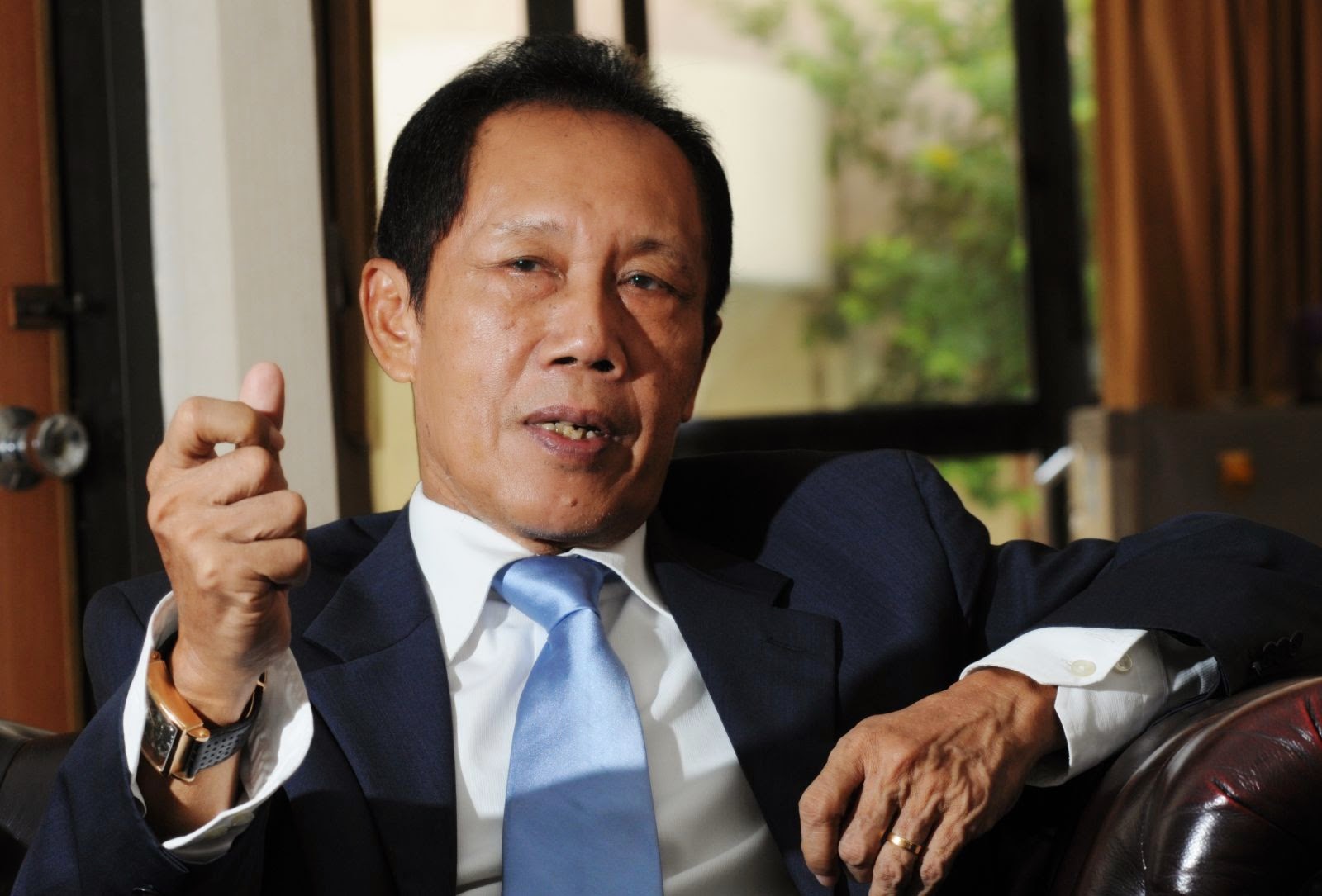 Head of the Indonesian Intelligence, Sutiyoso

I know that the Indonesian Intelligence and the Indonesian Security Forces are responsible for the assassination and murder of many West Papuan leaders.

So is the Head of the Indonesian Intelligence confirming that he is going to try and kill me too?

I am not scared of any methods the Indonesian intelligence will use against me. They cannot stop me campaigning for my people’s fundamental right to self-determination and Independence. My life is for this struggle and I will continue to campaign for my people’s freedom until West Papua is finally Independent.

I feel that the Head of the Indonesian Intelligence, Sutiyoso is very childish and behaving in a very ignorant and immature manner. He should be ashamed of laughing and making light of the situation in occupied West Papua where over 500,000 innocent West Papuans have been killed by the Indonesian Security Forces. 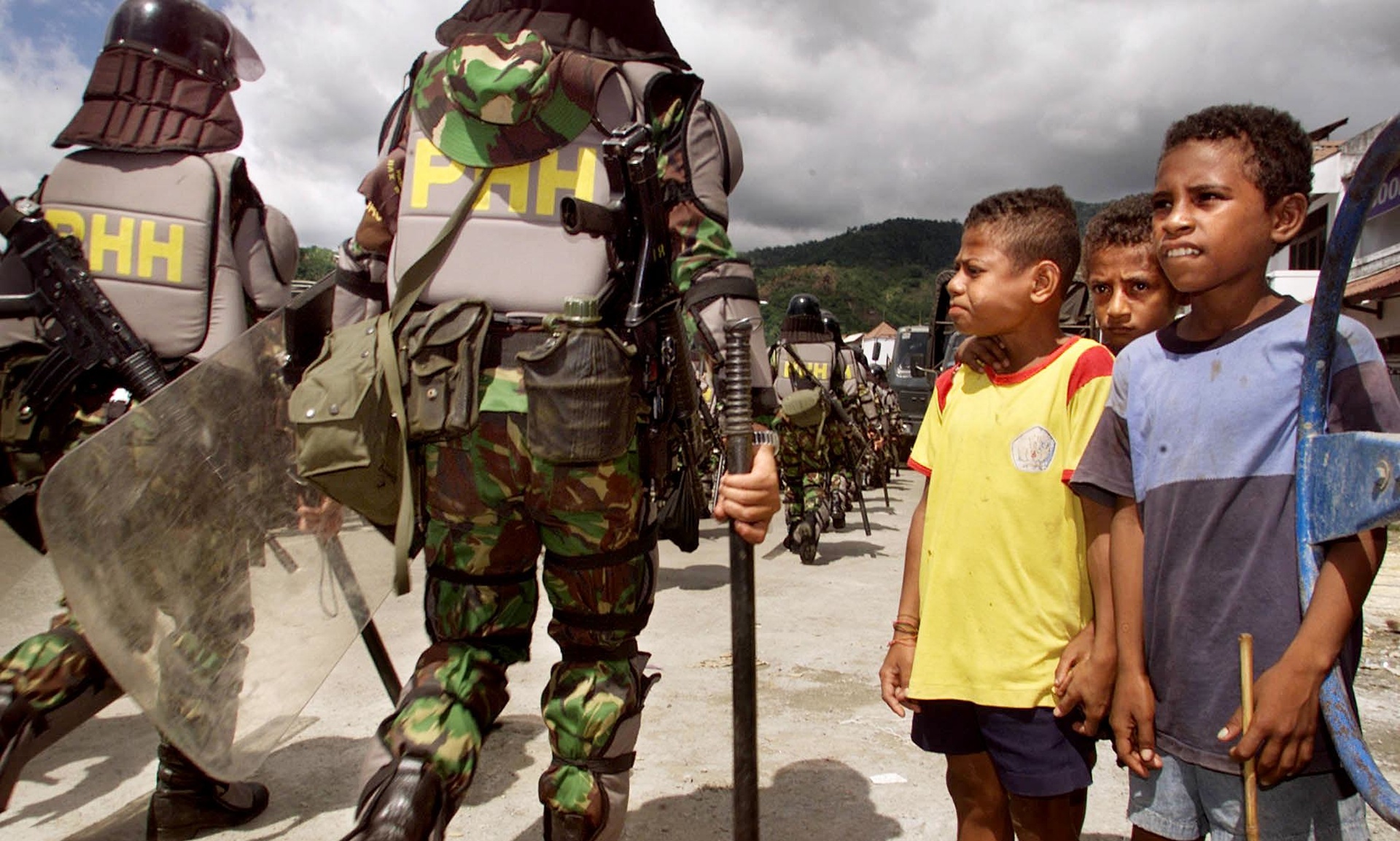 What kind of promise is this if more troops keep coming and 5000 more are now expected to fill up the new military command?

When it comes to West Papua who are the real liars?

West Papua was supposed to be a free Melanesian nation but is now under illegal Indonesian occupation, and has been ever since the illegal Act of No Choice in 1969.
Rather than being a free and fair Independence referendum for all West Papuans as promised by the United Nations, the Act of No Choice involved just 1,026 handpicked West Papuans forced to vote for integration with Indonesia. They were told that if they did not vote for Indonesia, their lounges would be torn out and they would be killed. 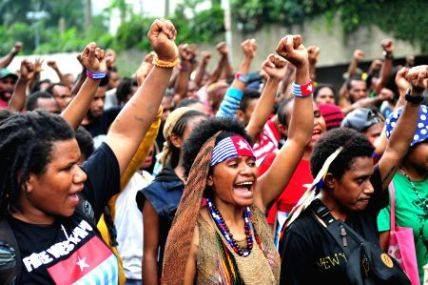 We West Papuans are not animals to be butchered by the Indonesian security forces. We are human beings and proud to be Melanesian West Papuans. We will keep up our struggle until our motherland of West Papua is finally free and Independent for us and for our children and grandchildren.