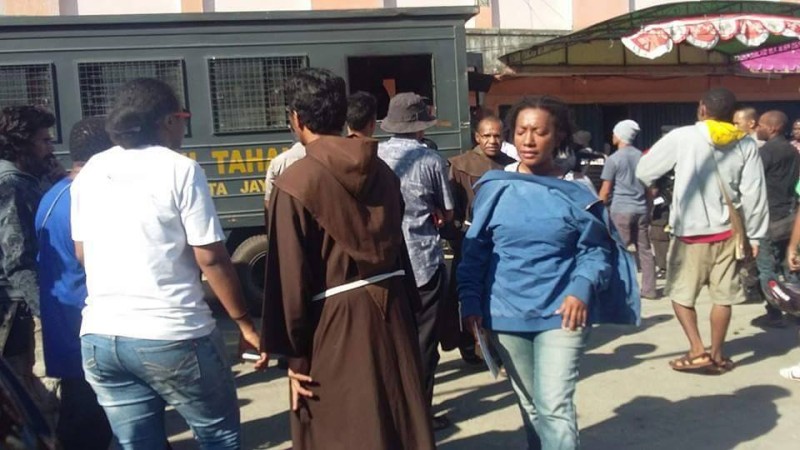 Arrest and beating of the monks

In the capital city of West Papua, PortNumbay/Jayapura, a number of West Papuans, including students and monks from the Franciscans (OFM) and Augustinians (OSA) Orders demonstrated today against the killings of the “Paniai massacre” in West Papua that happened last December. According to a witness, during the demonstration 2 police trucks arrived and the 6 monks among 12 others* were immediately arrested by the police without any prior negotiation.

After much negotiation, all those who were arrested were finally released.

Chairperson of the Regional Indigenous Council (DAD) in Paniai, Jhon NR Gobay asserted that the Indonesian police acted in very brutal and inhumane manner to disperse the peaceful demonstration.  He also spoke of how it shows the arrogance of the inability of the police officers and the state of Indonesia in exposing the actor and the perpetrators of the shooting of the four students in Paniai last December.

“It shows the democratic space in Papua is still closed,” said Gobay who also participated in the action.

West Papuan journalist Abeth You photographed the arrest and beating of the monks but described how “the police took my camera because they are afraid”. He told them that he was a journalist and even showed his press card but this was totally ignored by the police who said “what journalists?” 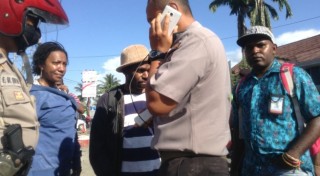 West Papuan human rights lawyer Olga Hamadi (left in blue) negotiating with Indonesian Police Commissioner Abetus to lower the demonstrators from the police truck. Abeth You, the West Papuan journalist who was attacked by the Indonesian police can be seen in a turquoise shirt on the right.

They immediately deleted all his photos and when he asked for the camera back, the police apparently held up his arms against his chest and throttled him. They threatened him with a gun and told him to get into the back of a police truck. He was later let go by other officials.

Victor Mambor from the Press Council  said such a practice is common against West Papuan journalists. He said if Papuan journalists are covering a demonstration,they are always regarded as demonstrators and are treated harshly, even through they have identity cards of their journalism.
He said “This is discrimination. Police are the law enforcement officers. But really do not know the law?”

Ongoing human rights violations lead back to the root causes

This is yet another case of the rampant Indonesian police brutality in occupied West Papua where even West Papuan monks peacefully demonstrating are beaten and arrested and local journalists get attacked and threatened with death. After more than 50 years of Indonesian occupation, there is still no freedom for any West Papuans in their own country. This is yet more evidence that the endemic state violence in West Papua will only come to an end at last when “the root causes of these violations”; (as described by Prime Minister Hon. Manasseh Sogavare of the Solomon Islands to the United Nations General Assembly) are addressed.

For more information about the root causes of the human rights violations in West Papua (the illegal Indoensian occupation and denial of the fundamental right to self-determination), please see the History of West Papua section of our website.

Much of the news and information in this article has been reported by West Papuan media outlet, TabloidJubi.

*The names and details of the monks arrested are as follows