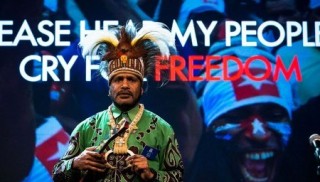 Once again, West Papuan Independence Leader Benny Wenda’s Papua New Guinea visa application has been rejected and he has been left unable to travel to Papua New Guinea. This shock visa rejection comes despite assurances from Prime Minister Peter O’Neill in an interview with ABC News Australia earlier this year that, there was “no reason why he shouldn’t be granted one”.

Following the rejection of Benny Wenda’s visa, he has written this Press Statement on the issue.

To West Papua, ULMWP and all the Melanesian and Pacific family,

Papua New Guinea (PNG) has rejected my application for a visa to enter the country for the second time. I am disappointed that PNG as a democratic country which values democracy, freedom and justice has come to this decision. The first, I was informed that the issue was an administrative matter and the reason given was that I did not complete the necessary PNG immigration documents and procedures.

As per an invite by the Governor of the National Capital District (NCD), Hon. Powes Parkop to attend a human rights refugee conference, and also take part in other events including PNG’s 40th independence celebrations, and the Pacific Island Forum in my capacity as the spokesperson for the United Liberation Movement for West Papua (ULMWP); I launched a full visa application which was checked by my lawyer and I preceded with flight bookings. A few hours before I was due to board my flight from London Heathrow to Port Moresby this week, I found out that the PNG immigration rejected my visa application, and as a result, I have cancelled this trip to PNG. There were no proper details or formal explanation from the PNG High Commission in London as to why my visa application was rejected.

West Papua is one of five top priority areas on the Pacific Island leaders Forum agenda, and I appeal to the people of PNG and the Pacific to rally your support on the recommendations set before the leaders.

We the ULMWP are calling on our Pacific leaders to form a high level PIF delegation to undertake a fact finding mission to investigate the human rights abuses in West Papua; and to strongly urge the United Nation to appoint a special envoy on human rights to West Papua.

There is growing support in the Pacific, and I want to personally thank my Pacific brothers and sisters who are always supportive of our freedom journey. Please continue to support the people of West Papua in our struggle for freedom. Thank you also to friends in Australia, New Zealand, and those globally who continue to support West Papua freedom movements.