On 17th July 2014, hundreds to thousands of people outside the local Indonesian Parliament office in Timika, West Papua, peacefully protested for an independence referendum and for the release of the scores West Papuan political prisoners who continue to be held behind bars by the Indonesian government. 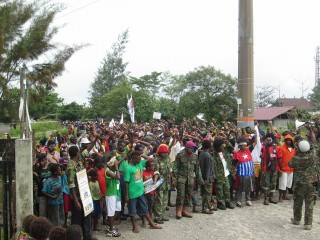 We asked that people please demand that he immediately release all peaceful people arrested in Timika on 17th, especially any children, that all the torture and human rights violations by police be stopped and that a full investigation must be held into the beatings and torture of peaceful protesters.

We are very happy to report that the after pressure from hundreds of people, both inside West Papua and around the world; 23 of the 24 Papuans arrested (including the 4 children) were released from Indonesian police custody.
However 1 KNPB leader, Leson Tabuni remained in detention and was among those severely beaten by the police.
We continued to urge for the release of  Leson, whom the Indonesian police continued to detain in West Papua with scores of other political prisoners who have been behind bars for years.
Although eventually released, Leson was severely beaten and battered by the police and military with their guns until his face was completely swollen and bleeding.

More testimonies of police brutality by those arrested

The West Papua National Committee (KNPB) published detailed reports and testimonies from those arrested and beaten on the 17th July.
Many gave detailed and shocking accounts of how they were severely tortured by the Indonesian police including a mother named Merlin Wenda, with her 6 month old child Jekson Tabuni.
Merlin told the KNPB: “The police hit me in the ear, pushed me with the baby aged 6 months, then they beat me.”
Efra Tabuni (16 years old) also revealed torture by the police:
“The security/police hit me in the shoulder. Slap after slap, they pushed me and I fell. After that they brought me to the police office in Mimika and they still hit me.”
Short footage of the arrests and photo information of these human rights abuses can be seen here 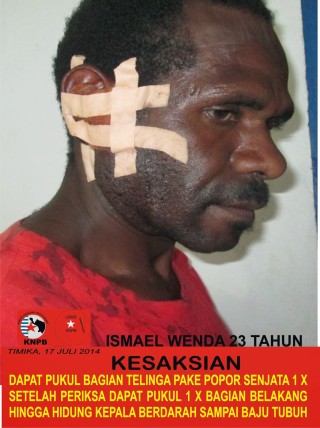 Ismael Wenda, one of the protesters who was severely tortured by the police. His face was struck repeatedly with a police gun until he was bleeding all over

These human rights violations are acts of evil and injustice still being committed by the Indonesian police and military in West Papua to this day, showing that the human rights situation has not improved.

We thank you for all your support in helping to put pressure on the Indonesian police so that the 25 innocent captives arrested have now been released.

We will continue to call upon and raise support from the international community to advocate for the release of all West Papuan political prisoners and the protection of their human rights.

Most importantly, we will continue to struggle for genuine self-determination and independence for the people of West Papua and we will educate the world about the situation in West Papua, as well as lobbying parliamentarians and other civil leaders to support self-determination for the Papuan people.