Over 80% of West Papuans boycott the Indonesian elections

On Wednesday 9th July, the people of West Papua held a nation-wide boycott of the Indonesian presidential elections after many pro-independence groups issued statements calling for a mass refusal to vote for any Indonesian government.

This is because all successive Indonesian presidents have systematically murdered the Papuan people and committed genocide in an attempt to crush pro-independence sentiment among the population.

All Indonesian presidents who have been elected  have used the votes of the West Papuan people to legitimize their occupation of the country; therefore by not voting for their colonial rulers, West Papuans show the world that they are Papuan not Indonesian and desire to be finally free from Indonesian colonialism.
You can see Free West Papua Campaign founder and Nobel Peace Prize Nominee, Benny Wenda’s statement here

The day of the boycott

On 9th July, hundreds of thousands of West Papuans from across the country peacefully boycotted the Indonesian elections, despite heavy threats by the Indonesian military and police, who were out in full force. 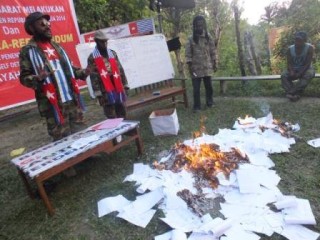 In the West Papuan capital city Port Numbay/Jayapura, the West Papua National Committee (KNPB) peacefully burned hundreds of voting papers along with various invitational leaflets by different Indonesian candidates. Some ballot papers were also written on by Papuans with the words “Boycott the Indonesian Elections 2014”.

The KNPB reports that throughout West Papua, approximately 80% of all Papuans refused to vote in the elections with some areas having a much higher percentage of people boycotting. In Timika data shows an estimated 99% of all Papuans boycotting or abstaining from voting in Indonesia’s elections and in Yahukimo, it was reported that the Papuan people from the 7 different representatives tribes declared that 100% of all Papuans of the region had boycotted the election.
Footage of the boycott in Yahukimo can be seen here showing towards the end of the video only Indonesian migrants voting  at the polling booths. Other parts of West Papua which had incredibly high boycott percentages documented include Lanny Jaya, Boven Digoel, Kaimana, Dogiyai, Merauke and Paniai.

Reportedly, on Friday up to 14 activists from the KNPB were arrested in Wamena by the Indonesian military after encouraging others to join the boycott. They were apparently severely tortured and are currently being held in prison cells in the 1702 Jayawijaya District Military Command prison.
Please contact the Military Chief of this District Command and put demand that he immediately release the 14 peaceful activists that he has locked up in his cells. Fax: +62 969 31086

Protests held around the world in support 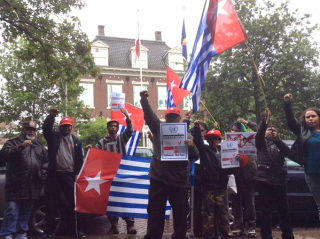 Free West Papua Campaign NL protests outside the Indonesian Embassy in Den Haag, Netherlands in support of the boycott

In support of the boycott and against the ongoing atrocities, protests were held not only throughout West Papua but right around the world, such as in Den Haag, Netherlands where the Free West Papua Campaign issued a joint statement on the boycott: “Today we stand here in front of the Indonesian Embassy in The Hague to support our People in West Papua. Their choice has been made. West Papua is not part of Indonesia, and that’s why they boycott   the election. We fully support the choice of our People!”

In London, United Kingdom, Free West Papua Campaign founder Benny Wenda gave an interview, showing support for his people who risked their lives to boycott these elections.
A protest in support of the West Papuan people’s rights was also held outside the Indonesian Consulate in Sydney, Australia.

The Free West Papua Campaign would like to thank everyone who attended these demonstrations to show your support to the suffering people of West Papua.

Thousands of people also joined simulation independence referendums throughout West Papua  to show that the Papuan people will vote but only in a free and fair referendum, supervised by the United Nations. Although the Indonesian police were furious, thousands of  people attended these referendums in Port Numbay/Jayapura, Yahukimo, Mimika, Yalimo, FakFak, Merauke and Biak. 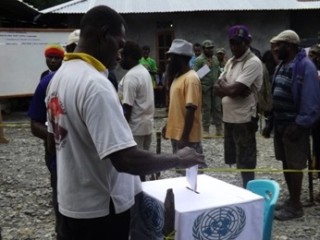 The results of each and every referendum showed an overwhelming majority of support for West Papuan independence over continuing Indonesian rule and a clear message to the outside world that the Papuan people’s desire for self-determination and independence sill burns as strong as it always has.

The people of West Papua have made their decision about their votes.
They will only vote in a genuine referendum for self-determination but they will not vote in any Indonesian election for an Indonesian government which continues to occupy their country and kill their people.

Thank you all very much for all the incredible commitment you have shown supporting the West Papuan people’s struggle for self-determination and independence; including their decision to boycott the Indonesian elections and show the world that they are Papuan not Indonesian.