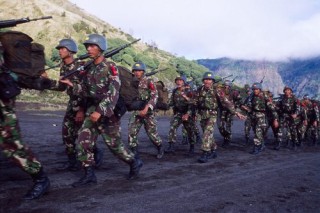 Tensions continue to rise at the border between Papua New Guinea (PNG) and West Papua as Indonesian troops open fire on PNG soldiers. The Post Courier newspaper reported that the incident happened at the weekend and follows a similar incident that happened on April 19th.

The shooting incident pushed the Minister for Foreign Affairs and Immigration to summon the Indonesian Ambassador Andrias Sitepu to be given further warnings.

Tensions have been rising in the border region ever since the OPM (Free Papua Movement) took control of a border post raising the West Papuan and UN flag on 5th April. There have been fears amongst the West Papuan refugee community that they may yet again be on the receiving end of reprisals from both the PNG and Inodnesian military and police.

A PNG Government official speaking on condition of anonymity said that the border situation “is very sensitive at the moment”. Certainly if similar incidents continue to occur it will draw attention to the situation in West Papua and push PNG to reconsider their relationship with Indonesia.