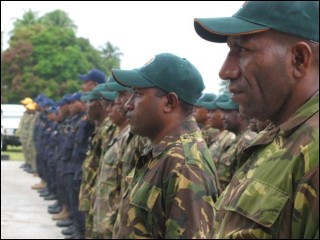 The following is a statement from the Free West Papua Campaign office in Port Moresby, PNG

In January 2011, Special Operation Sunset Merona (led by the Papua New Guinea police and army) burned down villages and camps of West Papuan refugees in and around Vanimo.

Most of these refugees had residency papers and had been legally in PNG for many years. They had fled persecution in West Papua at the hands of the Indonesians.

This is very much still a relevant story. There is documented evidence including a film footage taken in the aftermath of the Sunset Merona operation that took place two years ago. The present border crisis flowing on from the 5 April 2014 skirmishes between the OPM militia and Indonesia military has generated arguments that stands to be addressed immediately due to signs emerging that a Sunset Merona operation replica could be an option again for the government authorities in order to contain the border crisis.

In addition, the task is to put the government of Indonesia on notice to implement ‘best practice’ as set forth in that ILO Convention and the draft UN Declaration on the Rights of Indigenous Peoples in its economic development policies.
It is understood that the Provincial Intelligence Committee had already met last week, and were in the process of consulting with the National Intelligence Committee on the issue of involvement of suspected involvement of West Papuan refugees in the armed skirmishes between the OPM militia and the Indonesian military that started on 5 April 2014.The second meeting is expected to be held in Port Moresby this week.

However, observers of border security have noted the agenda of the meetings was designed by the Indonesian Consulate in Vanimo, who over the recent past was dressed down in Vanimo for his antics in influencing state – organs in the Sandaun Province on how to deal with border – related issues on PNG soil without necessary protocol afforded to PNG authorities in any communication with foreign diplomats. It is further understood the issue became prime time news in Vanimo, the country’s last – frontier province in the past two weeks as the border crisis unfolded.

These have caused fear and anxiety amongst the West Papuan refugees in Vanimo to flee their homes and are hiding in the jungles.  Some of them when contacted say they fear another Sunset Merona replica into their refugee camps.  This is despite PNG Government issued Permissive Residency Permits, granting them residency and protection in PNG.

The West Papuan refugees stand to be protected, and not thrown around like dirt. The child shown in the photo (below) was at the receiving end of state – sponsored terrorism dished out by Sunset Merona in 2011.

For more information regarding the planned visit and possible raids by PNG Customs, the PNG Defence Force and Royal Papuan New Guinea Constabulary into the refugee camps in and around Vanimo, Sandaun Province; please contact: