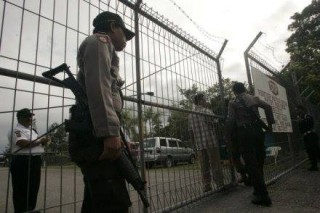 News has just come of another brutal murder of an innocent West Papuan civilian. On New Year’s Eve, in the Okaba District of Merauke, West Papua, a West Papuan man named Roby (who was from Sanggase village) was brutally beaten by Indonesian police. It has now been confirmed that Roby was beaten to death by an Indonesian police officer and a security officer,  a former soldier working for one of the giant companies in Merauke, Astra Group which Roby politically opposed along with almost all of the Papuans of Merauke as the companies are tearing great swathes of Papuan forest down, taking tribal people’s land away and working in collusion with the Indonesian military to threaten any West Papuan villages that oppose the company.

No justice for the victim’s family

Police guarded Roby as he was dying on the spot and when he was already dead, he was taken to hospital.

As of Saturday afternoon, the community in Okaba remained anxious. The victim’s family had still not initiated any steps towards obtaining legal redress, possibly due to fear.

Please help to share this article and other like it throughout the internet and to all of your friends so that the world will know about such horrific crimes against humanity and we can help to put further international pressure on Indonesia to stop such heinous murders.

And demand that he and his fellow police and military immediately stop such evil crimes against humanity.

Thank you very much.