Things not ‘getting better’ for West Papuans 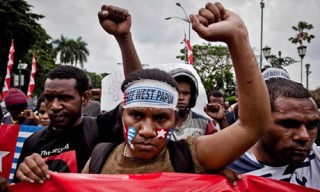 Free West Papua Campaign founder Benny Wenda has written the following article for the Guardian newspaper in the UK as a response to Australian Prime Minister Tony Abbott’s recent comments about the situation in West Papua.

Ever since West Papua was annexed and colonised by Indonesia in 1969 through a referendum ironically called the Act of Free Choice (we call it the Act of No Choice), my people have endured nothing but violence, hardship and human rights abuse. Maybe Australia’s prime minister Tony Abbott would then care to explain how things in West Papua are “better, not worse”, as he recently stated? Is it possible to have a better state of colonialism? Has Indonesia created a better state of fear? Better forms of intimidation? Better ways to suppress free speech?

If the situation is indeed getting better, why is it that the Indonesian government imposed a ban on international media and human rights groups from entering the region – which the West Papua governor said was lifted only yesterday? Surely if there was nothing to hide, it would be in their interests to open the gates and let observers in. The truth is that they are desperate to hide the reality of life there, less than 200km north of Australia’s shores.

Few Papuans manage to get out of West Papua alive to share their story. I fled in 2002 after being put on trial for a crime I did not commit because of my political opinions and leadership, and was granted political asylum in the UK. Two years ago, the Indonesian government issued an Interpol red notice in an attempt to stop my international campaign to bring self-determination to my people. With the support of my legal team I successfully had the notice removed: Interpol recognised Indonesia was abusing its notice system to extend their political persecution of Papuans outside of West Papua and across international borders.

I travel the world raising awareness about my people’s suffering and their struggle for freedom. People often ask what inspired me to devote my life to do this. I can only speak from my own experiences: how as a five year old boy I was forced by the Indonesian military to watch the rape of my three aunties, how throughout my student life I was subject to degrading levels of racism and discrimination by an occupying regime that continues to regard Papuans as backward, primitive, and sub-human.

My experience is not unique, and I am not on a quest for revenge. I have always and will continue to advocate for a peaceful solution to this decades-long conflict.

Human rights groups estimate that over 500,000 people have been killed by the Indonesian military in operations since the 1960s. Just last month, Indonesian police opened fire on unarmed Papuan civilians in a market, killing one and injuring two others because they refused to cut their hair. Is this what Abbott would call “getting better”?

In West Papua there is no political freedom. No basic human freedoms. In some cases we are even restricted in freedom of movement – in our own land. There are currently 57 Papuan political prisoners serving lengthy prison sentences for the “crime” of daring to speak out against Indonesian rule. The most high profile case, Filep Karma, has been nominated for the 2013 Nobel Peace Prize. He is serving a 15 year sentence for taking part in a peaceful flag-raising ceremony in 2004.

West Papuans remain the poorest people in all of Indonesia, despite having the greatest abundance of natural resources. Abbott is correct to state that Indonesia is becoming “increasingly prosperous”. They are prospering from the gold, oil and timber that they are stealing from us and our land. Abbott also says that he will not allow Australia “to give people a platform to grandstand against Indonesia”. Is he suggesting he intends to curtail freedom of speech laws in Australia to keep Indonesia happy? That makes for uncomfortable reading for the Australian public, if this is indeed the direction he plans to take their country. Will he also prevent Moana Carcasses Kalosil, the prime minister of Vanuatu, from visiting Australia now too? Just last week, Kalosil gave a speech to the General Assembly at the UN, urging action “on the genocide being committed in West Papua”.

During the second world war, the Fuzzy Wuzzy Angels of West Papua famously came to the aid of Australian military personnel, carrying the wounded on their backs and providing the hungry with food. Now it is the West Papuans that need Australia’s help. This is our hour of need. Recent events in Bali show that the issue of West Papua cannot be swept under the carpet and ignored. I always tell people that Australia is our big brother in Melanesia. It is time Australia took a stand for us.