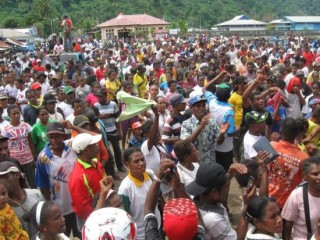 The two men had just been given 18 month and 2 year jail sentences for “rebellion” an antiquated law used extensively by the Suharto regime to repress dissent in Indonesia.

Kendi was dragged naked into the court room while Maniamboy remained forcibly detained in his cell, unable to attend his own trial.

When the two men were sentenced, hundreds of Papuans protesting outside raised West Papuan flags, each one of them risking a 15 year jail sentence under Indonesian national law.

After intense negotiations between the men’s lawyers, police in charge of the prison and protest organizer George Ayorbaba, Kendi and Maniamboy were released to a jubilant crowd.

For more information on this story see this report.

With your support, all Papuans shall be free from the chains of Indonesian colonialism.