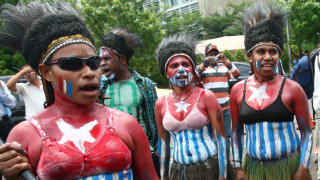 As leaders gather in Fiji this week for the Melanesian Spearhead Group (MSG) Leaders Summit, the Pacific Institute of Public Policy (PiPP) has released its findings from the first ever telephone poll conducted across Melanesia.

Seven questions relating to the “Melanesian family” of nations were posed, including one asking which major “non Pacific island” nation was considered to be the best partner for individual nations in the region.

MSG leaders may be encouraged that a majority (74.9%) of respondents were aware of the regional body to represent Melanesians.

Another question posed was “do you support independence for West Papua?” A clear majority of respondents across Melanesia said yes, with very high support in PNG (89.3%) and Vanuatu (88.2%). This suggests a disconnect between popular support and the position taken by governments in the region, except Vanuatu, which has long championed the West Papuan cause at the political level.

In relation to engagement with Fiji, a majority of respondents including those in Fiji itself, opted for increased engagement or keeping the level of engagement as it is.

The views expressed by the respondents of this poll may assist MSG leaders as they deliberate on the future of this region.