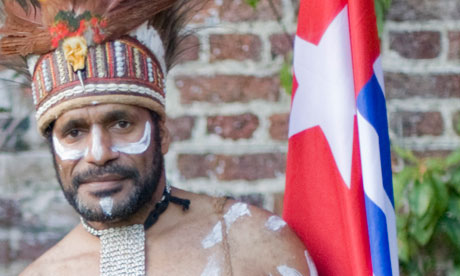 West Papuan independence leader Benny Wenda will be embarking on his first official overseas tour in February and March 2013. Having successfully fought to have an Interpol Red Notice against him removed, Benny is free to travel and more determined than ever to take the message of the West Papuan people around the world.

Benny will visit political leaders, lawyers, activists and supporters in the USA, Australia, New Zealand, Vanuatu, the Solomon Islands and Papua New Guinea to build support and awareness of the campaign for self-determination for the people of West Papua.

Ahead of the tour, Benny Wenda spoke of his hopes that “it will further raise the voice of the West Papuan people whose cries for freedom and justice have been largely ignored by the international community for the last 50 years”.

Benny will discuss the situation in West Papua with US Congress members in Washington DC. He will also visit the United Nations in New York, and meet organisations including Avaaz, Independent Diplomat, Witness and the Human Rights Foundation / Oslo Freedom Forum.

Travelling onto New Zealand, Benny will co-host a launch of International Parliamentarians for West Papua (IPWP) with Catherine Delahunty MP at the Parliament building in Wellington on February 12th.

In Australia, Benny and his lawyer Jennifer Robinson (co-founder of International Lawyers for West Papua) will host an event at Parliament House, Canberra on February 13th, attended by politicians and members of the legal fraternity.

Benny will also be visiting Melbourne, Sydney and Perth, as well as meeting with Aboriginal elders.

Benny will also visit Vanuatu and the Solomon Islands. The tour will conclude in Papua New Guinea, where a Parliamentary event in the capital Port Moresby will see both Benny and Jennifer Robinson speak to parliamentarians and also meet with community leaders.

Benny Wenda will be travelling with his lawyer Jennifer Robinson and independent filmmaker Dominic Brown.