Last week, we received information that over 80 West Papuans were arrested by the Indonesian police just for demonstrating in support of West Papua joining the sub-regional Melanesian Spearhead Group (MSG). 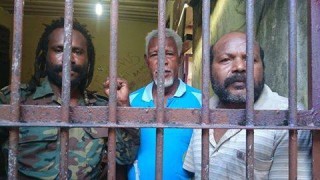 Chairman of the Regional Peoples Parliament (PRD) Apollos Sroyer, Secretary of KNPB Biak region Judas Kosay and Dorteus Bonsapia of the Federated Republic (NFRPB) are in Police custody in Biak after being arrested on 20th May.

Although West Papuan and international pressure* has helped approximately 50 of these activists to be released, some Papuans arrested last week remain in police detention in the towns of Manokwari and Biak. Also the Indonesian police are apparently being very threatening to peaceful activists in Wamena.
Many people have been severely tortured by the Indonesian police and are at risk or further abuse if left forgotten.

Please contact the Indonesian police in Manokwari, Biak and Wamena and call upon them to immediately release the West Papuans who were arrested last week during the demonstrations, and to stop threatening and oppressing the West Papuan people.

Head of the Indonesian Police in Manokwari
Paulus Waterpau
+62811496251 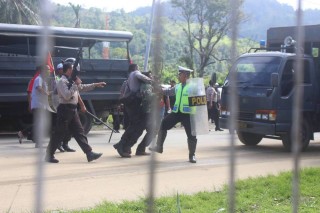 West Papuan man being arrested and beaten by armed Indonesian police in Port Numbay/Jayapura. 28th May 2015

As a member of the international community, please use your voice to apply important pressure on the Indoensian authorities directly responsible for arbitrarily arresting peaceful demonstrators. With your help, many more West Papuans can be released from torture and wrongful detention.

For more information on calling West Papuans in detention, as well as a list of useful phrases to use in the Indonesian language, please visit the website of human rights organisation Papuans Behind Bars.

*We recently published the telephone numbers of the Indoensian Police in the West Papuan towns of Port Numbay/Jayapura and Wamena and we encouraged people to telephone the police and call for the activists’s release. We have been told that all the 50+ activists have now been released after the Indoensian police received many international phone calls calling for them to be.