Pilipus Robaha, Deputy Chair of SONAMAPPA (National Solidarity Youth and Student Movement)  has been targeted and warned by a Jayapura chief of police intelligence unit on the eve of  a peaceful demonstration planned for Monday, 24 Sept, at Dok 8 near the river. Several demonstrations are being planned in every province of West Papua. The purpose of the peaceful actions are to publicly support  Vanuatu during the United Nations General Assembly (UNGA) as they address the human rights abuses and the self-determination aspirations of West Papua.

Police visiting Robaha at his home informed him that a “demonstration could not be held because Kapolres (city police) did not give permission for the action.”

Robaha explained to police “the action is endorsed by the ULMWP  organising committee.” He added that “Edison Waromi is a political leader having called for peaceful action, therefore it is our duty to organise the rally.” Police responded with an added warning not to hold the rally.

The police statements to Robaha are consistent with the conversations had with ULMWP Legistlative Committee Chairman Edison Waromi  on Saturday. The day before the Robaha incident,  Waromi was picked up by police at his home and taken in for questioning.

At this time none of the pro-independence groups organizing in West Papua have made an announcement to cancel any of the planned demonstrations. Unfortunately, because Indonesian security forces consistently resort to violence and intimidation tactics to oppress peaceful protesters, we are still anticipating mass arrests and brutality against the hundreds of thousands of West Papuans expected to participate in demonstrations this week. 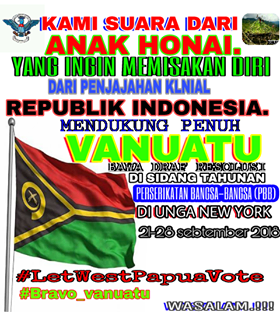