The following article comes from Benar News and was written by West Papuan journalist Victor Mambor. It was originally published here.

High school student Riko Ayomi was already dying when police brought him home in Sorong, a city on the western tip of West Papua province, an eyewitness said. 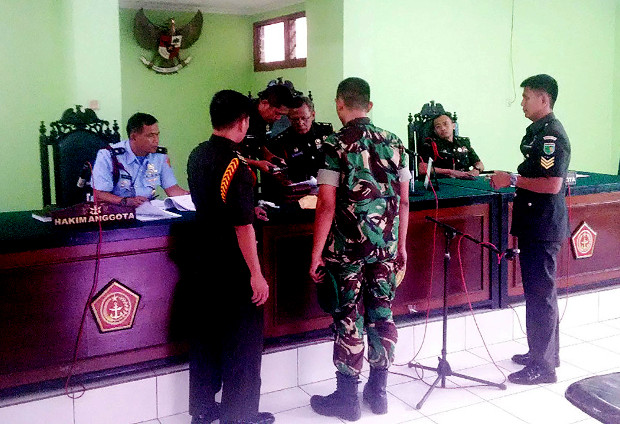 His life was soon added to the roster of what local people view as unexplained and unpunished deaths of indigenous Papuans in the remote region, and which authorities often pin on traffic accidents or alcohol abuse.

Police said they took Riko into custody after a mob beat him following an alleged theft, according to reports. About 24 hours later, before dawn on March 13, police officers brought the 17-year-old home, according to a person present at the time, who asked not to be named.

“Riko was dying. He could not stand, could not talk, parts of his body were bruised, like his neck and his chest. He had blood coming out of his mouth. His jaw was broken, and his body was covered with scrapes. Riko died around 5 a.m.,” the eyewitness said.

West Papua police spokesman Hary Supriyono said Riko was unconscious the whole time he was in police custody. When officers took him to the hospital, they were told Riko was drunk, he added.

Results of an autopsy conducted by police doctors have not been released, according to the Associated Press, which said police also released a photo of the dead teenager with a bottle of alcohol next to his body.

Police also cited a long-running dispute between two tribal groups in the area as a factor in the alleged mob beating.

But local people had little expectation of clear answers or justice in such cases, according to Gustaf Kawer, a prominent Papuan human rights lawyer.

“The government of Indonesia has failed to implement an effective legal process to punish the perpetrators of such killings,” he told BenarNews on Wednesday.

‘What kind of justice is that?’

Gustaf cited a shooting in August 2017 in the Pomako Port in Mimika regency that left one fisherman dead and others injured. Earlier this week, a military court sentenced a soldier, Yusuf Salasar, to eight months in jail in connection with the shooting.

“The sentence and the verdict are very far from a sense of justice. The maximum sentence is eight years. But prosecutors only asked for one year and three months,” Gustaf Kawer said.

In addition, the trial was held hundreds of kilometers from where the shooting took place, making it impossible for relatives and witnesses to attend, he said.

Another case was a police shooting at a protest on Aug. 1, 2017 against a company constructing a bridge in remote and mountainous Deiyai regency.

The shooting killed a civilian, Yulius Pigai, and injured at least seven others, according to a Human Rights Watch statement at the time.

“The perpetrators were sentenced to apologize and were transferred. What kind of justice is that? The only punishment for taking a life is an apology?” said John Gobay, a member of the provincial House of Representatives.

A police ethics panel probe into the shooting ruled four police officers were guilty of “improper conduct” but did not need to face criminal prosecution, only demotions and public apologies, a Human Rights Watch statement said.

Foreign media access is restricted in Papua and West Papua, Indonesia’s two easternmost provinces, which make up about one-fifth of Indonesia’s land mass.

The region is one of Indonesia’s poorest, with low literacy rates and high rates of infant and maternal mortality. Migrants from other parts of Indonesia make up about half the population and dominate commercial activity, according to reports.

The region has been home to a low-level armed separatist movement, the Organisasi Papua Merdeka (OPM), for decades. The OPM and Indonesian security forces are both guilty of human rights abuses, rights groups say.

Frits Ramandey, the representative of the National Commission on Human Rights in Papua, said security forces use excessive force against the local population because protests and resistance are often branded as acts of treason.

President Joko Widodo has not lived up to his pledge to Papuans in December 2014 to resolve such incidents and prevent them from happening again, he added.

“I empathize with the families of victims of violence,” Jokowi said during Christmas celebrations in a stadium in Jayapura, the capital of Papua, on Dec. 27 of that year.

“I want this case to be resolved as soon as possible so as not to happen again in the future. We want the land of Papua to be a peaceful land,” he said.

He was referring to the fatal shooting of five protesters by security forces in Paniai regency on Dec. 8, 2014. The shooting occurred after about 800 people gathered outside a military and police compound to demand an explanation for the alleged beating by soldiers of a 12-year-old boy the night, Human Rights Watch said.

“Despite three separate official investigations into the shootings, bolstered by Jokowi’s December 2014 pledge to thoroughly investigate and punish security forces implicated in those deaths, there has been zero accountability,” it said in an August 2017 statement.

The except comes from Human Rights Watch and was originally published here.

The circumstances of Ayomi’s death demand a prompt, thorough and impartial investigation. But that is unlikely to happen. Indonesian authorities rarely investigate security forces implicated in the deaths of Papuans. In cases in which investigations do occur, police found culpable in unlawful killings invariably face administrative wrist-slaps rather than criminal prosecution.

Until there is political will in Jakarta to meaningfully investigate and prosecute the killings of Papuans by security forces or unidentified attackers, the lives of Papuans such as Rico Ayomi will remain at risk.