On Wednesday 22nd June the governments of the Solomon Islands and Vanuatu made historic statements at the United Nations Human Rights Council in Geneva on the deteriorating human rights situation in West Papua. 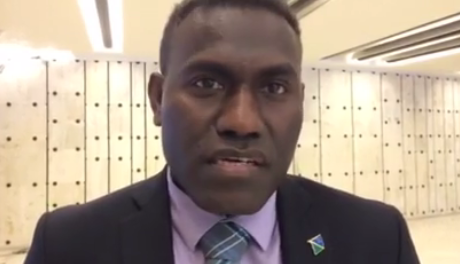 Solomon Islands government representative who spoke on behalf of his country, supporting the people of West Papua, at the United Nations Human Rights Council

“The delegation of Solomon Islands would like to draw the attention of the Council on the human right situation in West Papua, Indonesia. We express our deep concerns on the eroding human rights situation of the indigenous Melanesian Papuans, who are the indigenous population of West Papua. As a Melanesian state, the incumbent chair of the Melanesian Spearhead Group, and designated chair of the Pacific Islands Development Forum (PIDF) would extend its solidarity to our fellow Melanesians in West Papua. We would encourage the Government of Indonesia to find peaceful and sustainable solution of the on-going conflict in West Papua through constructive engagement with the representatives of the West Papuans and respect their right as a people.

“Whilst we welcome the increased attention given by President Joko Widodo to West Papua, the violation of human rights against West Papuan remains unresolved. The Solomon Islands government receives regular reports of cases of arbitrary arrests, summary execution, torture, ill-treatment, restriction of freedom of expression, assembly and association, committed mainly by the Indonesian police.

“On 2 May 2016 alone, 2,109 people were arrested mainly indigenous Melanesian Papuans, while participating in peaceful demonstrations in several cities in West Papua and some Indonesian cities. The demonstrations were held in support of the United Liberation Movement of West Papua (ULMWP) to be recognized as a full member of the Melanesian Spearhead Group (MSG), the commemoration of 1 May 1963 as Indonesia’s annexation of West Papua and to support the International Parliamentarians for West Papua (IPWP) meeting. During the arrest, some of them experienced torture and ill treatment from the Indonesian security forces.

“The Solomon Islands notes the recent outcomes of the Foreign Ministers Meeting of the Melanesian Spearhead group that was held last week in Fiji (14-17TH June 2016) where both Representatives of Indonesia and the ULMWP sat as MSG members during the deliberation. This outcome envisages to establish a safe space for constructive engagement with all parties with a view to addressing the concerns of the MSG members about the recent developments in West Papua. In this regard, the Foreign Ministers further agreed to establish a Committee of High Level Representatives of the MSG members to accompany and facilitate this constructive engagement.

“We also welcome the initiative of the MSG to work closely with the Indonesian government to visit the Melanesian Provinces of Indonesia at a later date. This important visit would allow for a clear, objective and independent view by the members of the MSG leaders and ministers.

“Journalists working on human rights are still prevented to have free and full access to do their work in West Papua. Our delegation is convinced that access of international community to West Papua, particularly to the UN Special Procedure, will provide an opportunity to improve the human rights situation. We reassure the Government of Indonesia to cooperate with the Human Rights Council by allowing the agreed visit of the UN Special Rapporteur on Freedom of Expression to Indonesia which should include to West Papua.

“Finally, we encourage the Indonesian Government to facilitate the human rights fact-finding mission to West Papua that the members of the Pacific Island Forum have decided to conduct.’

Vanuatu government representative who spoke on behalf of his country, supporting the people of West Papua, at the United Nations Human Rights Council

“My delegation associates itself with the statement made by Solomon Islands.

“Vanuatu wishes to express to the Council our deepest concerns on the deteriorating human right situation in West Papua. We continue to receive increasing reports of gross human rights violations in West Papua.

“In the recent months more than a thousand of West Papuans were arrested by Indonesia police for participating in peaceful demonstrations. This contradicts the responsibility to protect and facilitate protests that advocate for political and cultural views that differ from, and even oppose, those espoused by the Government.

“We call on the Council to work with Indonesia Government to allow the UN Special Rapporteur on Freedom of Expression to visit West Papua to get objective and independent views of the situation on the ground in that region.

“We also call on the Government of Indonesia to allow free and full access of international journalist to West Papua and allow the human rights fact-finding mission by the Pacific Islands Forum.

“Well just a few minutes ago the Solomon Islands made statement at the Human Rights Council about highlighting the continuous human rights violations in West Papua. Its really good, I really feel happy that the Solomon Islands is able to make such statements at the Council level. I think that it will give the International Community awareness of what’s going on. Not much information goes out to the International Community about whats happening so we thank the Rights body of the UN to raise the voices of our fellow human beings there that do not have a voice at the Human Rights Council.

“I’m glad as well that my college from Vanuatu made a statement in support of west Papua in highlighting the human rights issue in west Papua so its really great.”

The Vanuatu government representative also spoke of the Melanesian solidarity and support for West Papua at the United Nations.