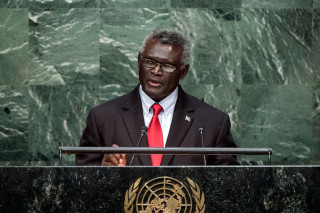 The Prime Minister called for an end to the human rights abuses in West Papua, and call “for the full and swift implementation of the 1960 declaration on the granting of Independence to colonised countries and peoples.” He also called for the Indonesian government to allow “free and unrestricted access” for the Human Rights Fact Finding Mission to West Papua which was called for by the Pacific Islands Forum this year.

He spoke of how in the long term, the United Nations “cannot shy away from the root causes of these violations.”

Transcript of the speech

“At the Summit, the MSG Leaders also granted Indonesia Associate membership and the United Liberation Movement for West Papua an Observer status.

“Mr President, Solomon Islands reaffirms that human rights principles are universal, indivisible, interrelated and must be treated in a fair manner. All states have a legal duty and moral responsibility to uphold, respect and promote human rights and where necessary take preventive, protective and punitive measures against human rights abuses or violations in accordance with the UN Charter and applicable international laws.

“Against the foregoing backdrop, the General Assembly is well aware of the continuing concerns of human rights violations in the Papua and West Papua regions of Indonesia. Solomon Islands together with the Pacific Islands Forum are seeking genuine dialogue and cooperation with Indonesia. The outreach is to resolve and dissolve reported allegations of human rights violations occurring on two of Indonesia’s ethnic Melanesian regions namely Papua and West Papua. Solomon Islands further calls on the Geneva based Human Rights Council to do more in investigating and monitoring of allegations of human rights abuse and violence on ethnic Melanesians in the concerned regions of Indonesia. We would like this issue attended to in a timely manner.

“In this connection the Pacific Islands Forum Leaders in its recent Leaders Summit in Port Moresby approved the deployment of a fact finding Mission to West Papua to establish the alleged abuse of human rights there. We appeal to the Government of Indonesia to allow free and unrestricted access to this Mission in the true spirit of regional cooperation. In the long term however, the United Nations cannot shy away from the root causes of these violations.”

This year has heralded in a new era of strong, rising Pan-Pacific solidarity for West Papua and much of this has been led at a parliamentary (and now United Nations) level by the government of the Solomon Islands. We are all so very grateful to Prime Minister Manasseh Sogavare for his strong lead in essential support for the people of West Papua, especially for West Papuan self-determination.

History continues to be made for West Papua and after 50 years of brutal Indonesian military occupation, the West Papuan people are finally receiving strong support from their Pacific brothers and sisters. This incredible Pacific support only continues to rise and is driving forward the international movement for the freedom of West Papua.

To Prime Minister Hon. Manasseh Sogavare and all supporters, thank you very much – Tanggio tumas!