Today, history was made in London as West Papuan independence leader Benny Wenda declared the start of a new Pan-Pacific solidarity for West Papua. 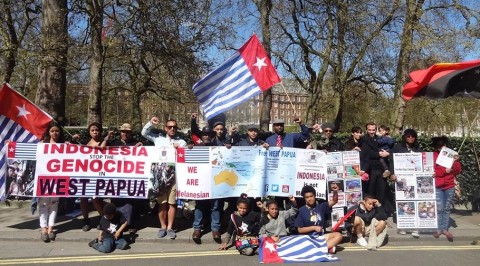 Among those who attended was Paul Aiton, the former captain of the Papua New Guinea National Rugby League Team. Paul, who is well known throughout PNG, feels very strongly about the suffering of his fellow Melanesians in West Papua and is committed to helping to raise awareness and support for the cause.

We would like to thank him and everyone who attended the protest for their solidarity and support for the West Papuan freedom struggle. 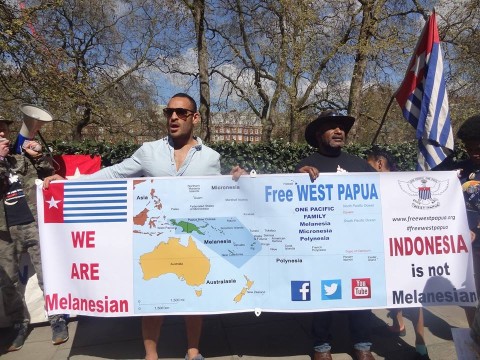 At the end of the protest, West Papuan independence leader Benny Wenda held a banner with Paul Aiton, acknowledging One Pacific family; that West Papua is Melanesian and that Indonesia is not. Such solidarity continues to increase dramatically in the wake of the representative United Liberation Movement for West Papua (ULMWP) submitting an application to join the sub-regional Melanesian Spearhead Group (MSG).

In a written statement, Benny said “We are launching a major campaign today, starting here in the United Kingdom. From now on we are calling on all our Melanesian and Pan-Pacific brothers and sisters to unite hand in hand to bring West Papua back to the Pacific family. We are asking all our Pan-Pacific people across the Ocean to support us in our struggle for freedom and our first steps to nationhood and self-determination by joining the Melanesian Spearhead Group.”

This digital banner, worn by supportive social media users is calling for West Papua to join the Melanesian Spearhead Group

We would like to thank everyone around the world for their ongoing solidarity for the West Papuan people.
With your help, West Papua will one day be finally free.