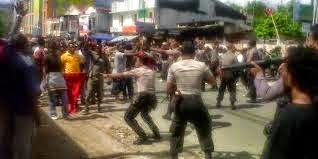 It brings me much sadness and grief to report that 2 days ago on the 19th of March; 4 more of my people were shot by the Indonesian police. 1 was killed and at least 3 more were arrested, all simply for attending a peaceful fundraiser in Yahukimo, West Papua.

Yesterday morning, the Indonesian police opened fire on a peaceful gathering of Papuans who were fundraising money for humanitarian aid after Cyclone Pam struck Vanuatu and many other nations in the Pacific. This fundraising was coordinated across West Papua by church groups in West Papua and the umbrella organisation, the United Liberation Movement for West Papua. The entire gathering was forcibly dispersed by armed Indonesian police opened fire upon my people.

My people were just mourning and trying to raise funds for their brothers and sisters in the Pacific but were gunned down mercilessly.

My people are still mourning for our brothers and sisters in Vanuatu who have died during Cyclone Pam. What threat are we posing by holding a peaceful gathering to raise funds for humanitarian aid? Now we mourn also for the West Papuans who have been so brutally shot and arrested in the last few days. by the Indonesian police. We want the world to see that we West Papuans are suffering under such a brutal system that it kills us just for raising funds for aid after natural disasters.

We are always so grateful for all the incredible support for our freedom shown to us by our brothers and sisters in Vanuatu and the rest of the Pacific and we want to show that we give them our full support too during their suffering from Cyclone Pam.

Just for offering sympathy and what little funds we can raise for relief to our Pacific brothers and sisters, we continue to be shot like animals by the Indonesian state. Earlier this month a 17 year old West Papuan activist, Deni Bahabol was also tortured and murdered by suspected members of the Indonesian Special Forces in the same region of Yahukimo.

Does Indonesia have no mercy or sympathy for Melanesian people at all?

No matter how brutal the Indonesian response, we West Papuans will continue to mourn and raise funds and support for our people in Vanuatu and other Cyclone affected areas. No-one can stop us struggling for freedom and no-one can stop us from supporting our Pacific brothers and sisters.

I am sure that one day West Papua will be free and we will be able to gather and show support for all our brothers and sisters across the Pacific in peace and freedom.

Benny is available for media inquiries about the incident. Any media is welcome to contact him though this press contact number: +44 (0)7411053953
Email: office@bennywenda.org