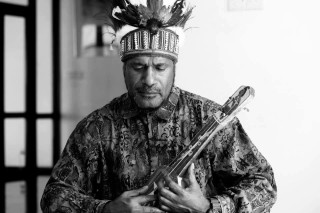 It brings me great sadness to learn that last week, our dear friend and brother, Martinus Yohame was found murdered after being kidnapped by the Indonesian security forces in West Papua.

It is an act of extreme evil to abduct and kill someone just because they are peacefully speaking out for their human rights to self-determination and on behalf of the Free West Papua Campaign I fully condemn his murder and demand that those responsible be brought to justice.
I would like to thank Amnesty International for joining the call in demanding justice for his case and in helping to further defend the rights of our people.

Martinus Yohame was a true freedom fighter of the West Papuan people who died not for himself but for the whole nation. He will be missed by us all.
Martinus was the Chairman of the West Papua National Committee (KNPB) in Sorong and always mobilised the Papuan people to resist Indonesian State oppression.
On 20th August 2014, he gave a press conference, declaring that the people of West Papua refused the Indonesian president (who was arriving near the Sorong Region).
Martinus always called publicly for a Free West Papua and strongly condemned Indonesia’s destruction of our natural environment.

Just for making such comments, Martinus was kidnapped by suspected members of the Indonesian security forces the next day.
His body was found on 25th August, floating in the sea after he was tied up and shot several times, with his face smashed in.
How can the Indonesian government claim to be a democracy when they commit such evil brutality against peaceful activists?

When I hear about the murders of more and more of my people, I am always full of sadness and grief.
How can they do this to human beings?

Tomorrow, the Free West Papua Campaign will be holding a protest outside the Indonesian Embassy in London, United Kingdom to demand justice for the murder of Martinus Yohame and an end to all the killings of our people.
We will meet at 12:00 outside the Indonesian Embassy at 38 Grosvenor Square and call for a Free West Papua.
I urge all supporters around the world to also hold similar demonstrations against the killings and in support of justice and freedom for West Papua, in memory of the life and vision of Martinus Yohame.
We lost a great freedom fighter and our hearts are full of grief but we remember that his death was never in vain and that his vision will continue to inspire the new generation of young West Papuans to stand up and struggle for freedom as he did.

On behalf of the campaign, I give my sincerest and deepest condolences to the family of Martinus Yohame, who never got to see him in a Free West Papua.
In your hearts and our hearts, he lives on today and his dream is the dream of all our people.
It was not fulfilled in his lifetime but with his spirit, and the spirit of every Papuan; we will continue to struggle on until the dream of a Free West Papua becomes a reality.
Today we cry, but I am certain that one day we will celebrate together in a Free West Papua and remember the sacrifices of the brave martyrs like Martinus, who died for our freedom.

Farewell Martinus Yohame, you have given the ultimate sacrifice for our people, dying for the freedom of West Papua.

May you rest in peace. Your struggle is our struggle and we will always remember you as we continue this campaign for a Free and Independent West Papua, once and for all.