Press Release
This statement has been released by Benny Wenda, Nobel Peace Prize Nominee and founder of the Free West Papua Campaign 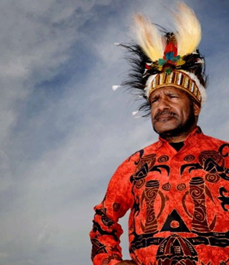 I am writing to you today to ask for your essential support in calling for the release of two French journalists, jailed only for reporting on what is really happening to my people and I am also asking you to help us together break down the walls of silence in occupied West Papua.

Thomas Dandois and Valentine Bourrat are two journalists who had been in West Papua making a documentary about the real situation in West Papua.
The pair were arrested on 6th August, jailed by the Indonesian police and are now being threatened with a 5 year jail sentence and $40,000 US dollar fine for simply being journalists in West Papua.
I am calling on all friends and supporters to please join us for an international day of action on Monday 25th August calling for their release.
The Free West Papua Campaign will be holding a protest outside the Indonesian Embassy at 38, Grosvenor Square in London from 12:00 onward and I urge everyone around the world available to please also hold demonstrations in your local area on the same day for the release of Thomas and Valentine and for genuine media freedom in West Papua.

Friends, please join me and my people on this international day of action to call for their release, and for journalist access at last in occupied West Papua.
Thank you very much for all your ongoing help and support.

My regards to you all,

The Free West Papua Campaign is calling for the release of Thomas Dandois and Valentine Bourrat, French journalists Indonesia has jailed simply for reporting in illegally occupied West Papua