Statement from Benny Wenda on the arrested journalists 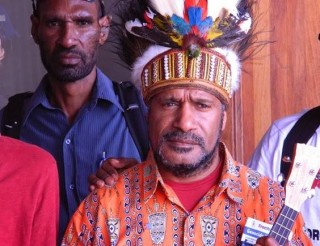 Two days ago the Indonesian military arrested two French journalists for trying to expose to the world is happening in West Papua. We, the people of West Papua wish to send our support to Thomas Dandois, Valentine Bourrat and their families back in France. We pray that no harm will come to them and that the Indonesian police release them safely and immediately.We thank them for their bravery and support in working to tell our story. For 52 years now the Indonesian military has been trying to hide what they are doing in West Papua and keep us silent. This is why they always try to stop the foreign journalists reporting. Indonesia does not want the world to know about West Papua. But with the determination of our people and the growing support of people all around the world, finally, after 500,000 of our people already killed, we are being heard.

We are calling for all people around the world who believe in justice, freedom and democracy, including all journalist and media to support the 2 French journalists and put pressure on the Indonesian government to release them immediately. This is 21st  century and still Indonesia is arresting journalist for telling the truth.

Valentine Bourrat and Thomas Dandois, French journalists arrested and jailed by the Indonesian police for reporting in West Papua