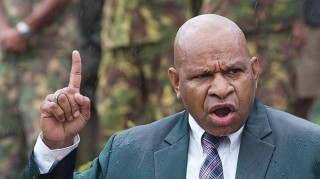 Mr. Belden Namah leader of the opposition in PNG

We are extremely happy to report some wonderful and historic news from Papua New Guinea (PNG).

On Monday, the leader of PNG’s opposition, Mr. Belden Namah showed his full support for a Free West Papua in a media statement. Mr. Namah, who is from Vanimo, in the border region of PNG has always been a long time sympathizer with his West Papuan brothers and sisters but today true history was made as Mr. Namah released a press statement calling for a Free West Papua.

Papua New Guinea has a moral obligation to raise the plight of West Papuans and their struggle for independence with the Indonesians and before international bodies and forums.”

On behalf of the Free West Papua Campaign and the people of West Papua, we would like to extend our warmest thanks to Mr. Namah for this wonderful and brave statement.

This is a truly hist

In addition to his recent media statement, Radio New Zealand also reported on further statements made by Mr. Namah in relation to Indonesia’s border incursions. Mr Namah says Indonesian military have established their presence at various points in PNG including Vanimo.

“On some occasions, if not most of the occasions, they go and burn down houses. They threaten PNG citizens with guns whether for shielding OPMs or for whatever reason. So our people on the border, they live in fear all of the time. Papua New Guinea (government) should come out and make an open statement. Because, if we do not make a clear cut decision on the issue of West Papua, this problem is still going to exist.”