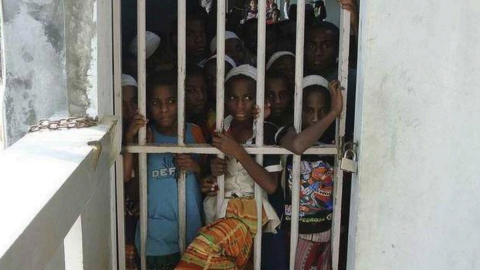 Two more West Papuan children have escaped from their boarding school in Jakarta after being tortured and recalled the horrors of their forced conversion to Islam and abuse by their Indonesian captors.

Papuan boys at the Daarur Rasul Islamic boarding school, outside Jakarta, were locked behind bars at night “for their discipline.”

”If we didn’t read the Koran and pray at certain times of day, we were locked up and then we were burned,”

“Sometimes they slapped us on the face, beat us with a wooden stick. They just told us we Papuans were black, we have dark skin.”

In a horrific process so similar to slavery, West Papuan children, possibly in their thousands to this day are being kidnapped, forcibly converted, brainwashed, locked up and tortured by Indonesia to try and prevent the next generation of West Papuans from learning about their own culture and aspiring for independence.

This is Indonesia in Papua. 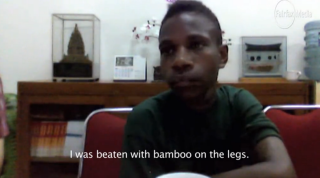 Demianus Gobay, like his brother still covered in scars recalls the torture he faced during his time in the boarding school
http://bit.ly/1glKZBq

Demianus Gobay from Paniai in West Papua was taken from West Papua as a 5 year old Christian child to a strict Islamic boarding school in Jakarta.

His name was changed to make him sound more Muslim, he was denied contact with his family and beaten when he strayed from the curriculum. The Papuan children were shipped to Jakarta and on the boat the girls, despite being Christian were made to wear headscarves. Their names wee changed to make them sound more Muslim and they were told that their real Papuan names were “forbidden.”

Demianus’s “education” consisted almost entirely of learning the Koran, he was regularly punished and beaten. After two years of this hell, Demianus escaped, only to be re-captured and taken to another boarding school. Throughout his “schooling”, he was beaten on the legs with bamboo, on the back of the head with a belt until he bled, and burnt with a cigarette if he strayed. He shows the circular scar on his hand. ”If we didn’t read the Koran and pray at certain times of day, we were locked up and then we were burned,” Demianus says.

Sometime later, without Demianus’s knowledge, his brother Seth was also taken to an Islamic boarding school in Jakarta. He was also beaten and unable to contact his family with no access to telephones. Another punishment was to make children walk squatting for one or two circuits of a yard.

His teachers also told him:

“You get naughtier if you go to an internet cafe”

He was given the Indonesian staple, rice instead of Papuan sweet potatoes and he recalled how “sometimes there were weevils in the rice” and the children were not allowed to eat pork – traditionally one of the most important parts of the West Papuan diet and culture.

When they were sick, they ”didn’t do anything for us”, Demianus says. One of the teachers at As-safiiyah, Usman Musa, told Demianus that when he grew up he ”should go back to Papua and Islamise the Papuans”, the boy recalls.

Late last year, an incredible story of hope and happiness emerged from West Papua. The two boys, now young teenagers, were finally reunited after escaping their respective schools with the help of a West Papuan university student, Frans Tomoki. They had not seen each other for years. Demianus had been quite brainwashed during his time in Jakarta. He remembered very little of his life in his home village, or any of the ceremonies of Christianity, including the Lord’s Prayer.

The boys are now doing catch-up classes at a village school to prepare them for junior high school.

Tomoki, meanwhile, believes a group of men in the western part of West Papua are still bringing children out of poor provinces. All the children are Christian, Tomoki says, destined for conversion. Tomoki says that when it had become known he was helping Demianus and Seth, he received several threatening calls – one from Jupri Gobay, and two more from a man called Muhammad Kotouki, a parliamentary candidate for the strongly Islamic PKS political party in West Papua. The men were quite specific in their threats, Tomoki says. ”They said they would have me arrested for kidnapping.”

The man who rescued two boys from kidnappers can now be arrested for kidnapping under Indonesian law. These boys are so lucky and brave to have managed to escape but for the rest of West Papua’s stolen children they are living like slaves in Hell.

How does Indonesia’s Economic Affairs Minister Hatta Rajasa describe it? He says sickeningly that this is “one of our ways to obtain a ticket to heaven”.

The Indonesian occupation of West Papua is one of the most savage occurrences in human history.

How can they do this to children?

You can sign this urgent petition here, calling upon for an end to the kidnappings

Please save the children of West Papua before any more have to suffer this horrific fate.