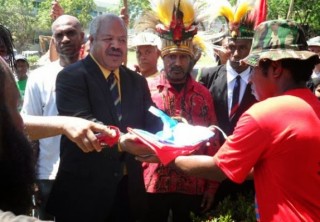 I recently returned to the UK after a month long tour of Papua New Guinea where I was hosted by the Governor of Port Moresby, Powes Parkop. During my time in PNG I met with local and national parliamentarians and oversaw the launch of a new Free West Papua Campaign office in the capital Port Moresby. There was also a historic meeting held in the Parliament, with Jennifer Robinson from International Lawyers for West Papua (ILWP) giving a speech that outlined the legal arguments for self-determination in West Papua.

On the final day of the trip, Governor Powes Parkop raised the West Papua flag above Port Moresby City Hall, where it will fly permanently as a sign of Melanesian solidarity for the struggle in West Papua.

Awareness in PNG of the situation in occupied West Papua is growing daily and I was heartened by the support shown by people all over the country for their brothers and sisters across the border.

Unfortunately, the situation in West Papua continues to deteriorate, and I am writing to you asking for your continued help this year in lobbying your local parliamentarian to raise the issue of West Papua.

At this moment in the Puncak Jaya region of the central highlands the Indonesian military are engaging in sweeping operations, hunting for what they call ‘separatists’. How can we Papuans ever be labelled ‘separatists’? We never have considered ourselves as Indonesians? We are Melanesian Papuans. The Indonesian regime is occupying our land against our will.

Over 500,000 people have been killed by the Indonesian military since they first set foot in West Papua, and I renew my calls for UN peacekeepers to be sent to West Papua immediately. I also call on the Indonesian Government to free all political prisoners and allow international media and human rights groups’ free access to the region.

If Indonesia has nothing to hide then why ban them?

The truth is they are desperate to hide the reality of life in West Papua. The daily rapes and killings being committed by Indonesian soldiers. The imprisonment of peaceful activists. The denial of free speech to the Papuan people. The restriction of movement to Papuans in their own land.

We Papuans just want to have our voice heard so that one day we can choose our own future under a free and fair referendum.

The United Nations has unfinished business in West Papua. I won’t stop my work until they take responsibility for their grave errors of the past and hold a fresh referendum.

Thank you for your support and I wish you a peaceful year ahead.