28th anniversary of the death of Arnold Ap to be commemorated

Jayapura: The chairperson of Solidaritas Korban Pelanggaran HAM Papua (SKPHP)- Solidarity for Papuan Victims of Human Rights Violations,  Lokbere Peneas has announced that they will be commemorating the 28th anniversary of the death  of Arnold Clemens Ap, the Papuan human rights leader who is thought to have been murdered by the Indonesian Government. Source 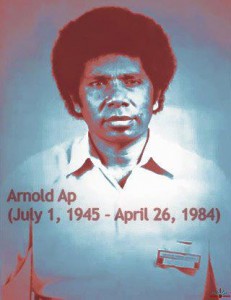 ‘We wish to inform the general public in the city of Jayapura and its environs that SKPHP will commemorate the 28th anniversary of the death of Arnold Clemens Ap who is believed to have been  murdered by the Indonesian government. During the anniversary we will organise a number of actions, ‘ Peneas. told JUBI.

He said that the agenda of the anniversary would include campaigning as well as the performance of Mambesak music in various places in Jayapura and throughout the district of Sentani. Prayers will be said at the grave of Arnold Ap and there will be a press conference, as well as speeches being delivered in front of the UNCEN (Cenderawasih University) Museum.

Arnold Ap (1 July 1945 – 26 April 1964) was a Papuan leader, a cultural worker, anthropologist and musician. Arnold Ap was the leader of the Mambesak group and Curator of the Museum of the Cenderawasih University . He also performed Papuan music during weekly programmes on the radio.

In November 1983, Ap was arrested by a Kopasus unit, imprisoned and tortured. He died from a shot in the chest in the month of April. The security forces said at the time that  he had made an attempt to escape, but it is clear that he was  executed by Kopassus.

To this day, Arnold Ap and his Mambesak music are very popular throughout West Papua and his creations are  regarded as symbols of Papuan  identity.